“When I imagine us, we come into focus at our beginning—three young girls walking through our neighborhood under a prickly summer sun.”

Dawn Turner (MEDIA’ 87), Kim Turner, and Debra Trice shared so much as children in 1970s Bronzeville—the same neighborhood, the same schools, and, for sisters Dawn and Kim, the same bedroom. They spent summer days as “thing-finders” like Pippi Longstocking. They built hideouts and rode ten-speeds. They couldn’t know at the time how drastically different their lives would look decades later.

After earning a degree from Illinois, Dawn became a journalist for the Chicago Tribune. Debra spent time in prison for murdering a man. Kim suffered a heart attack and died at age 24.

In her new memoir, Three Girls from Bronzeville: A Uniquely American Story of Race, Fate, and Sisterhood, Dawn reaches back to those sun-drenched days to find the points at which their stories begin to diverge from one another. The result is in turns heart wrenching and hopeful.

It is a love story to their girlhood—and to the women they became.

“My earliest memory of myself is of my sister.”

Dawn’s family and her community serve as a vibrant backdrop to the story of the three girls in sometimes funny, sometimes heartbreaking ways. Dawn recounts hiding under the dining room table as a little girl, listening to her mother, grandmother, and aunt gossip and laugh. Throughout their lives, these three women are a constant source of strength for Dawn and her sister.

Younger sister Kim was always a few steps behind Dawn, tagging along on her and Debra’s summer adventures. “Kim didn’t walk until, as Mom put it, ‘she damn well pleased.’ After that, she ran and kept running,” Dawn writes.

In high school, Kim started skipping school and staying out late. She was drinking and their mother constantly worried about her. When Kim discovered she was pregnant, she thought the baby would help her grow up. She told Dawn she would go back to school. Tragically, Kim miscarried late in her pregnancy.

“I expected that my sister would mourn for a while and then eventually heal,” Dawn writes. “At the same time, I knew that something had ruptured inside her, deep in a place where we could neither see nor understand and where no amount of scar tissue could adequately cover.”

Kim struggled, sometimes seeming to land on her feet, and sometimes not. When Kim died suddenly of a heart attack a few years later, it left Dawn and her mother stunned and heartbroken. Dawn describes Kim’s absence as “an expanse often too difficult for us to accommodate.”

“Are you sure you don’t want to see her one last time?”

“I won’t leave your side if you want to go,” he said. He took my hand in his. “Looks just like she’s sleeping.”

“I watched her sleep all of her life. She’s not sleeping.”

Kim and Dawn had different temperaments, but they shared a fierce love and loyalty to one another. “I was the big sister and I guess the narrative is supposed to be that I am the protector,” Dawn told me in a recent interview. “But I felt comforted and protected by her. My sister was really a part of me in a way that you just don’t get in any other type of relationship. And she is a part of me still.”

“As children, we had moved freely around our world of low-slung public housing and gated high-rise developments. But right around adolescence we have to start making a choice. If we choose right, a promising future lies within our grasp. If we choose wrong, the path is unforgiving. The ground has already begun to harden around each of us, and soon it will be impossible to undo who we have become.”

Dawn paints a rich and detailed portrait of each girl’s unique personality that reveals their strengths as well as their imperfections. Dawn takes care to point out, however, that the direction our lives take is not a simple tabulation of our good and bad decisions.

As a child, teachers frequently told Dawn she was smart, and in turn Dawn didn’t want to let them down. So, she applied herself to her schoolwork, and continued to win the praise of the adults around her. Being smart became part of her identity, and this led her to Illinois.

Once on campus, however, Dawn struggled. After a difficult first year, she was able to find faculty and staff who pushed her to do her best and who wanted to see her succeed.

Bruce Nesbitt, after whom the Bruce D. Nesbitt African American Cultural Center was named, was an important mentor for Dawn at Illinois. “He was encouraging. He wanted nothing from me but my success,” she explained.

“I will never forget filling out an application to go to New York for an internship. He’s like, Oh, no, this needs to be typed out. It’s got to be neat. And so, he’s tapping out my resume with his two pointer fingers,” Dawn laughed. “And then he uses stenciling to put my name at the top to make it look like this really nice resume. Now we do all that stuff on the computer. Who would do that at the end of a day dealing with a thousand other kids going through the cultural center? But he did that.”

Dawn got the internship and described it as one of the best summers of her life. “These things lay the foundation on which to build. I have no idea what my life would be without a degree from the University of Illinois at Urbana,” she said.

Kim and Debra were, in Dawn’s words, more daring than she, and the feedback they received at school was very different. Dawn wishes that their boldness was not treated as a liability. “What we are not accustomed to saying is, okay, let’s see how we can direct your energy and use how your brain works to help you develop into someone who goes to college and then maybe runs a company or is an entrepreneur? How do we reach the kids who don’t always sit quietly and follow the rules? Because daring is not always bad,” Dawn said.

Unfortunately, Debra and Kim never tied their identity to their success in school. Both fell into addiction—Debra to drugs and Kim to alcohol. For Debra, this path would lead her to a hot summer night when, while under the influence, she killed a man with whom she regularly did drugs. Debra was convicted of murder and sentenced to fifty years in an Indiana prison. Dawn and Debra continued their friendship through Debra’s sentence, and even collaborated on a series for the Chicago Tribune.

Years into her sentence, Debra completed her bachelor’s degree while in prison. Dawn attended her graduation ceremony and remembers her heart breaking when Debra admitted she never thought she was smart. “I thought, are you kidding? She was one of the prettiest girls in class, but also one of the smartest. I identified that in her, but she didn’t identify it in herself,” she said.

Dawn admits that all three girls shared an addictive personality. While Kim succumbed to alcohol and Debra to drugs, Dawn channeled her tendencies into what she calls a more socially acceptable addiction. “My addiction looks like discipline. I get up and go straight to my computer,” she said. As a child and now as an adult, her brain craves a sense of control and focus.

“I think of both Kim and Debra and know: There but for the grace of God, go I,” Dawn said.

“Although Kim and Debra discovered their daring as children, I’d found mine as a writer. My notepad doubled as my shield, my pen as my sword.” 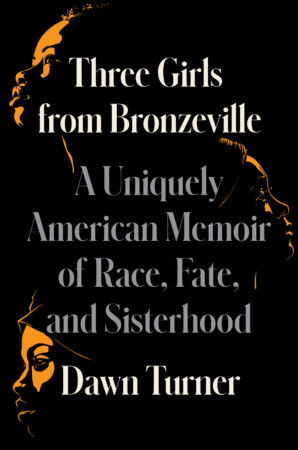 Dawn’s new book has just been released and is already receiving glowing reviews in a number of publications including the New York Times, Publisher’s Weekly, Chicago Tribune, and Vogue.

Dawn hopes that readers will connect with the universal story of family and loss, choices and chances, love and legacy.

“We all have to go through something. We don’t get out of this life unscathed,” she said. “But the book is also about friendship and loyalty and how our communities affect us. We watched our little nook of Bronzeville change in so many ways that affected so many people—especially when crack came to the neighborhood. There are many lives that are in some ways lost, and not only through death, but also through losing opportunities and talent because of the abandonment of community.”

In honor of her late sister, Dawn recently established an endowed scholarship in the College of Media to support undergraduates through funding and experiential learning opportunities.

“Kim struggled with finishing college,” said Dawn. “It was important to her, but she just couldn’t do it. I always knew that I wanted to create a scholarship, and I thought it would be a wonderful tribute to her to have a vehicle by which she could, in ways large and small, help somebody else finish and get through. It keeps her memory alive.”