Illinois researchers are among the most prolific in the country, supported by more than $650 million of grant funding from federal, state, and private foundations. Our campus is home to over 150 centers, laboratories, and research institutes, each bridging disciplines and pushing boundaries in service to solving the world’s most critical challenges.

For graduate students at Illinois, this means they often find themselves at the heart of the research. In labs and in the field, they explore the edge of what we know—and what is possible.

Every year graduate students are invited to submit images that capture the essence of their research. This is but a sample—for a full list of finalists and winners, visit the Graduate College on Instagram. 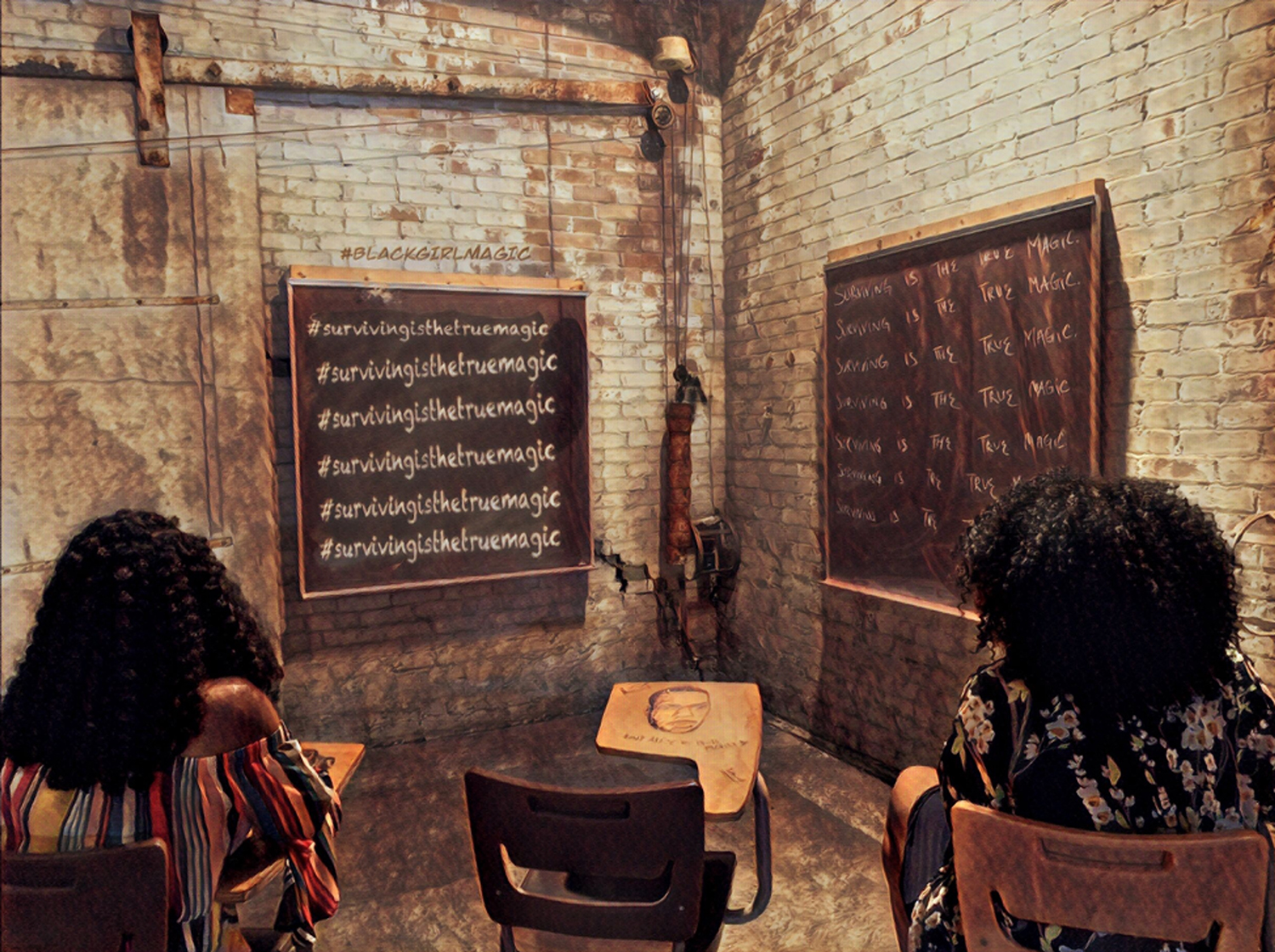 ‘Survival is the True Magic’: Exploring Digital Counterspaces and Resistance Amidst Oppressive Contexts

This image of myself and another black graduate student seated in a dilapidated classroom and the accompanying message “#SurvivinglsTheTrueMagic” is an ode to both the resiliency of Black girlhood in the face of broken school systems, and to the everyday acts of resistance that Black Americans engage in as means of survival.

The message highlights that the #BlackGirlMagic social media movement is not only an intentional centering of strengths, but also an acknowledgment of systems of oppression that require almost magical efforts to overcome. Hashtags juxtaposed against the dilapidated classroom represent the collision of our digital and physical worlds; here, the contrived image of America as “the most advanced nation in the world” is placed in conversation with the dire state of its most marginalized communities. The constant dehumanization of marginalized communities creates conditions in which communities must engage in efforts to reassert and celebrate their humanity.

My research explores how these efforts manifest across our physical and digital worlds, and how Black Americans engage in acts of resistance that foster connection, counternarratives, and survival amidst oppressive contexts. As such, this image and my research are inherently tied, and both function as my own means of resistance and survival. 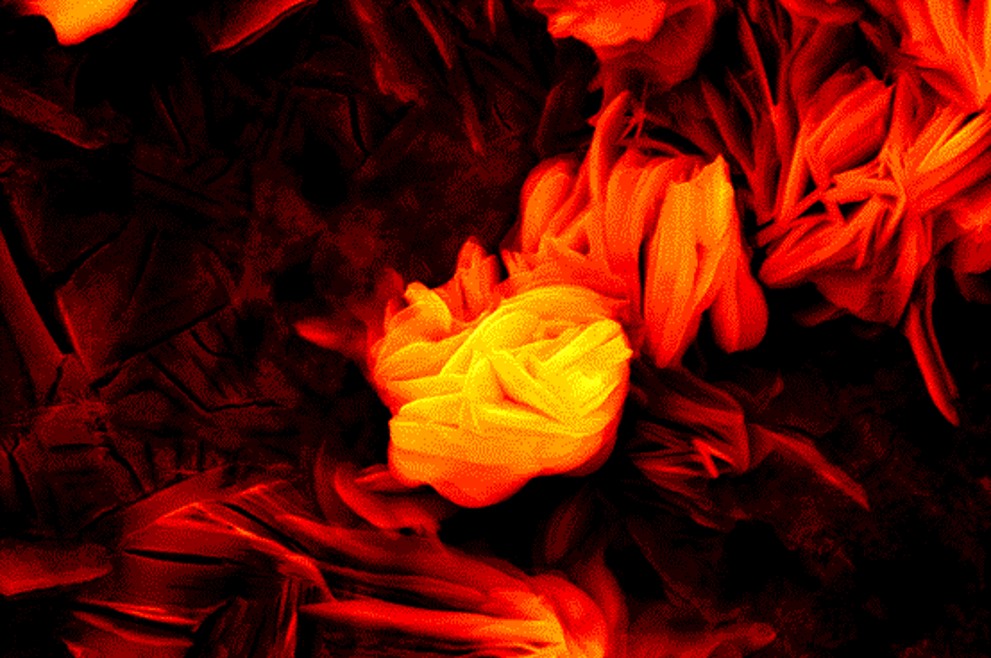 Microscopic Roses and Thorns on a Metal Surface

When we look at a piece of metal, we usually don’t think about what it looks like at the microscale. Through simple surface modifications, however, a seemingly smooth surface can be formed into one containing geometries that resemble those found in nature. In this image, a metal surface has been modified to form microscopic “roses” and “thorns.” Through these simple reactions, we can make the surface both aesthetic and functional. These kinds of metal surfaces have a wide variety of potential applications in treating, preventing or detecting diseases, and I am currently exploring the use of this surface as an antibacterial agent. The presence of the microscopic patterns on the metal surface provides a higher surface area for interaction between the surface and the bacteria. 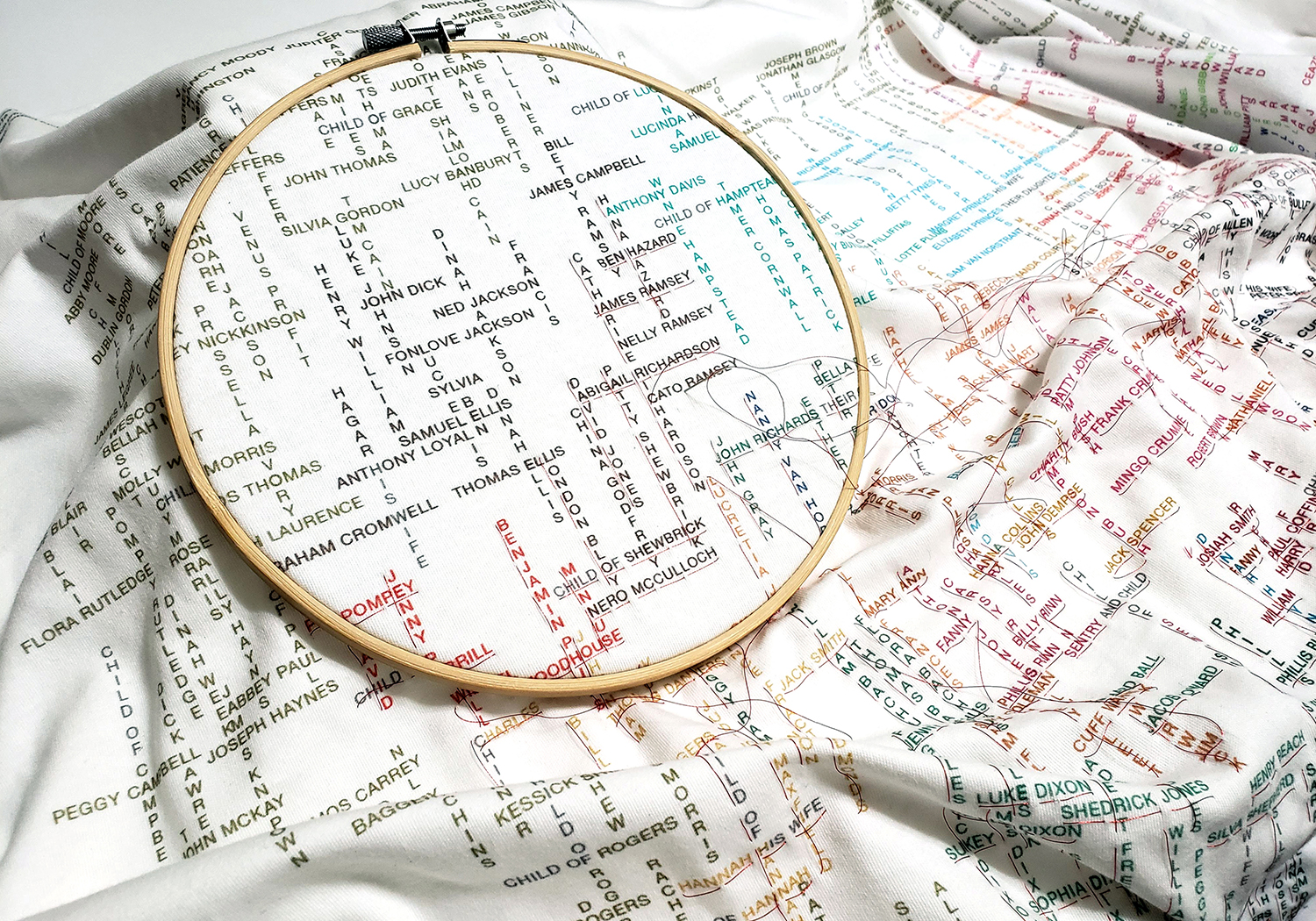 This image displays an in-progress state of my visual study: a textile/fabric iteration of a historically based dataset. This 2016 dataset is a simplified and incomplete copy of an 18th-century handwritten manuscript entitled, Book of Negroes. The registry documents the biographical material of 3,000 Black Americans (historically labeled the Black Loyalists) who emigrated from New York (America) to Nova Scotia (Canada) at the end of the American Revolution.

This process image is part of a larger study that uses art and design to explore questions on how incomplete historical material can matter in relation to human interaction and experience. 1,000+ names of the Black Loyalists are re-presented as traveling across the fabric. While working closely with these names (optically and tangibly), I noticed how I viewed them as surrogates for the actual migrants who traveled across land and water. This resulted in me working less mechanically and more intuitively, prioritizing name placement based on possible familial connections over that of abstract rules for structure and arrangement. The latest intervention with embroidery retraces my decisions for arrangement. While working, thoughts of repeated joining and disjoining of relationships and mis/re-identification of individuals emerged, complicating perceived experiences of the Black Loyalists. 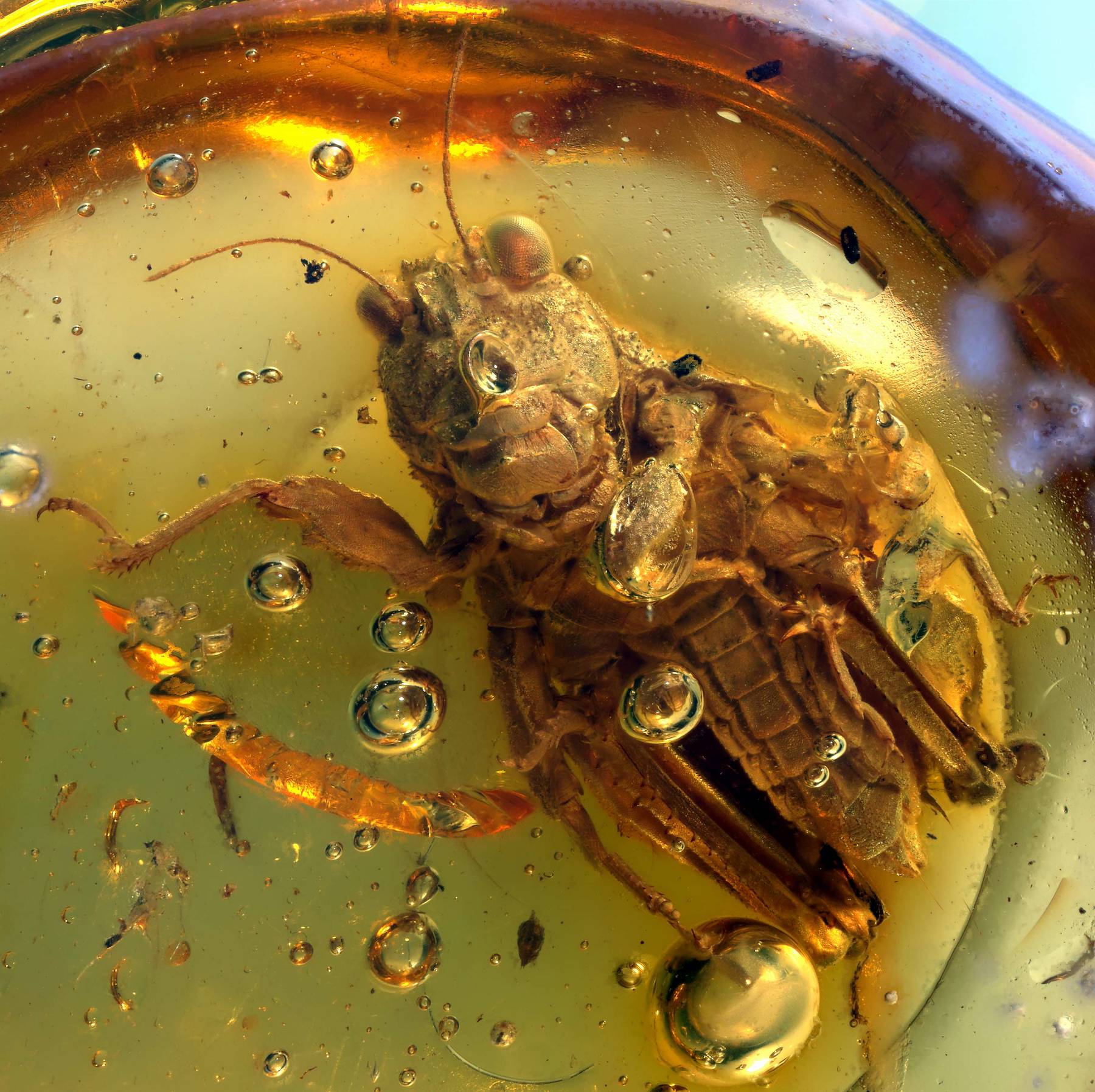 Specimens in amber can be a valuable source of information for paleontologists who wish to have a clearer picture of the paleobiota and paleoclimate during the time period when the amber was deposited in the ground. Important information about the evolution of the organisms trapped within is locked away inside and awaiting study.

Unfortunately, amber can be notoriously difficult to work with, especially when it comes to photography. Without proper preparation, fossil inclusions may go unnoticed. Without adequate conservation, specimens may be irreparably damaged and forever lost to science. My specialty is the preparation and conservation of fossil resins here at the Prairie Research Institute’s Center for Paleontology. I was fortunate enough to be able to photograph Baeotettix lottiae (Orthoptera, Tetrigidae), which is the holotype of the genus and species of this pygmy grasshopper. 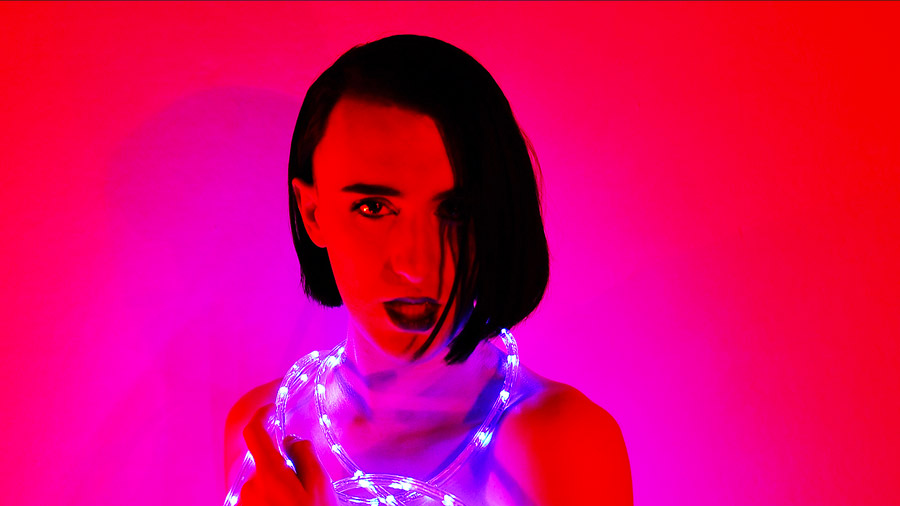 Shiny a.k.a. It Looks Like the End of Time

In my first semester as a graduate student, I wrote a paper titled: “Where have all the queers gone?” In it, I began my own reckoning with the historical tradition of mainstream dance forms to erase anything deemed “other,” whether by intentional exclusion or by attempts at assimilation. These forms have long been contested by dance artists invested in lineages of political dance making. “The queers”, the feminists, artists of color, and artists with disabilities have been there all along, radically shifting the way dance and video art sits in the broader field.

Studying with many of these artists, and now at the conclusion of my graduate study, the artworks I make are an attempt to visualize a future. It is a dense, saturated future where nonconformity is visible. It is an end of time, in which the “mainstream” complicates, ferments, and blooms a new and broadened understanding of what it looks like to be human. This screenshot is from “Shiny,” the third in a series of music/dance/video productions that locate my queer body, voice, and experience centrally, as a means by which these traditional popular media are mobilized to illuminate—in vibrant LED light—my non-binary identity. 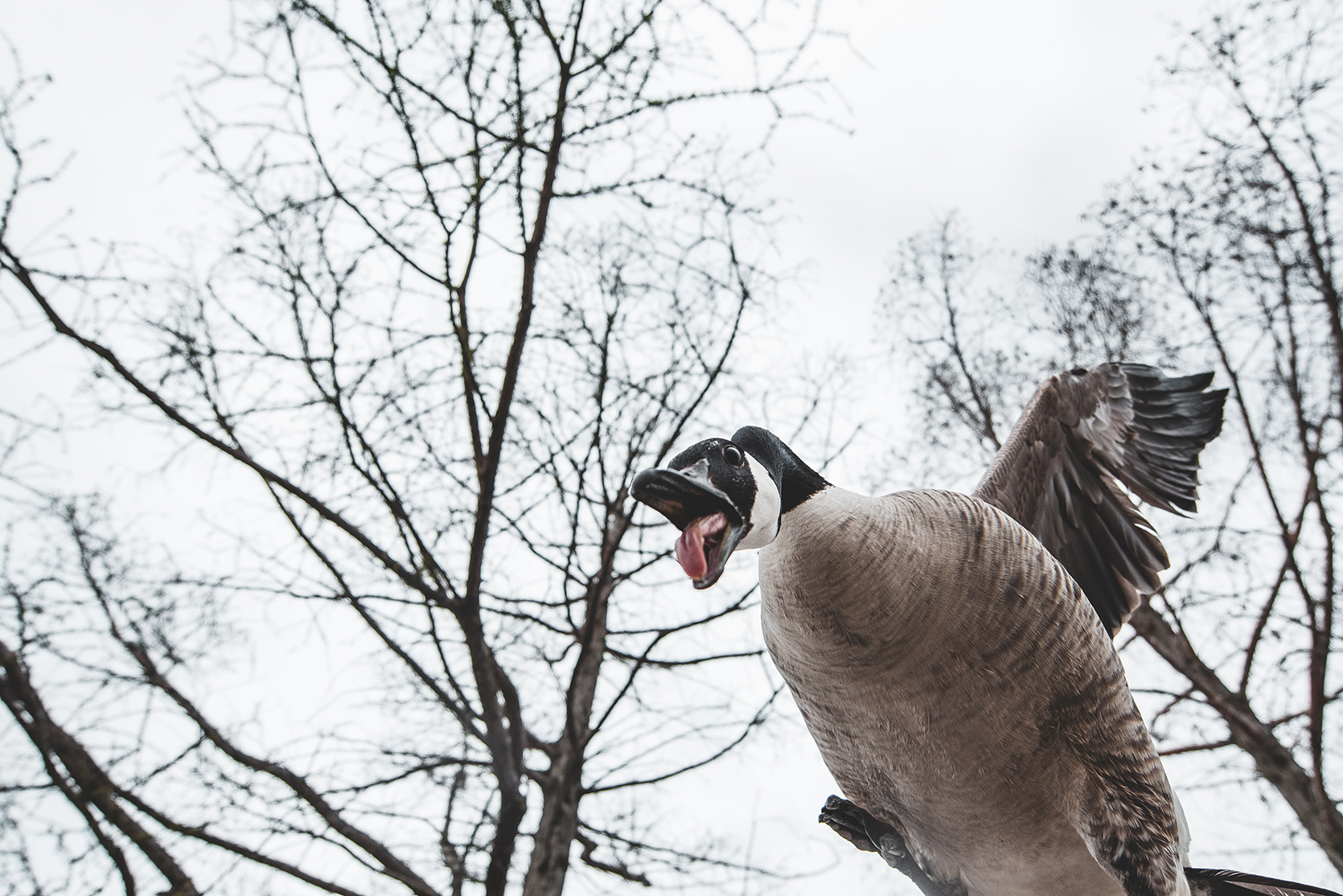 Acts of Aggression by Nesting Geese

A male Canada goose vigorously defending his female during a nest check in an urban parking lot. Giant Canada geese now have many positive and negative connotations across the country but were near extinction early in the 19th century. Reintroduction efforts and the ability to thrive in urban environments have led to increases in their populations.

Abundances of Canada geese are economically important as a game species and serve important ecological roles. However, their ability to thrive in close proximity to humans has been associated with a range of conflicts, their feces, the risk to air traffic, and direct attacks by nesting geese on humans. The photographer’s research uses GPS transmitters and remote biosensing to examine behavioral trade-offs geese make in cities versus rural areas. 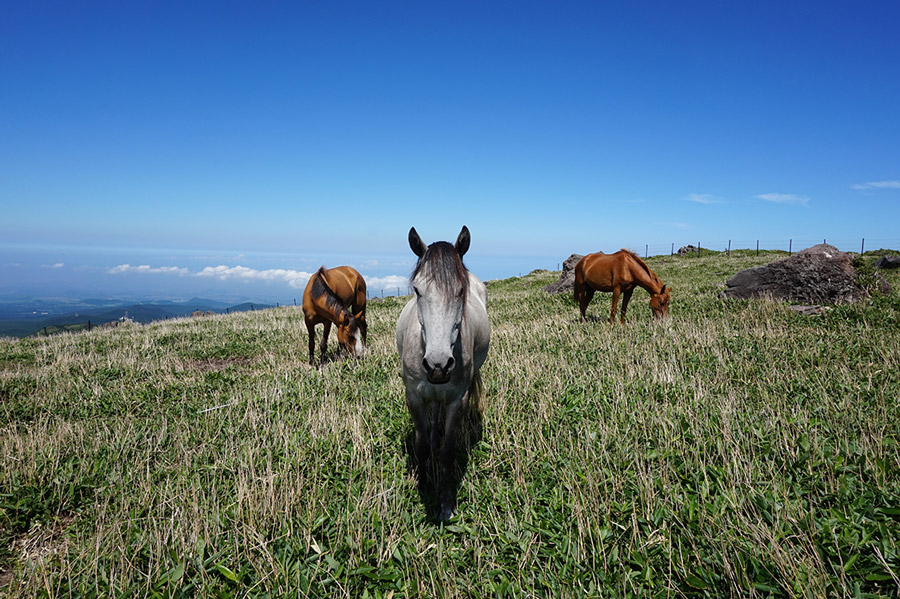 In Search of The Landscape’s “Original” State

“It was not like this!” A public outcry yearning for the restoration of the landscape to the “original” state had brought ten horses to the experimental site on top of Mt. Halla every summer since 2016. With the designation of Mt. Halla—the highest mountain in South Korea, located at the center of Jeju Island—as a national park in 1970, cattle and horse raising in the national park were discontinued. The establishment of the natural preserve, unexpectedly, resulted in the overgrowth of broad-leaf bamboo across the region. This natural rewilding process has unsettled both local memories of ecological purity grounded in the historical connection of Jeju communities to the lands as well as more scientific ideals of purity through the endangerment of rare species that reside in the subalpine climate zone on Mt. Halla.

This photo was taken in the summer of 2018 when I was conducting ethnographic research on a landscape restoration project carried out by the Jeju provincial government intended to address the relationship between ideal purity and historical ecology. With this photo, I indulge in thoughts on multispecies relationships that have created and dismantled the imaginaries of purity projected onto the landscape on Jeju Island. 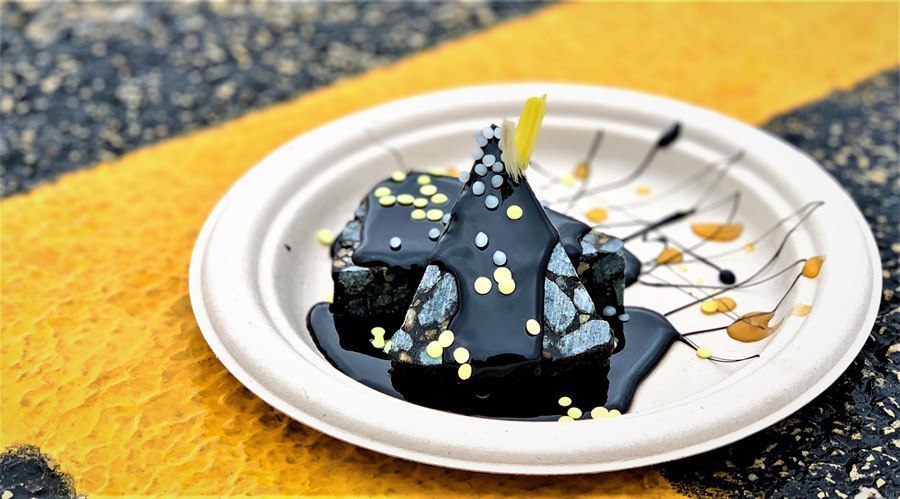 Highways to driveways, airports to parking lots, we are all surrounded by asphalt pavements. Ideally, we wish for smooth rides, however, with every year we experience an increase in potholes and cracking in our asphalt roads, right? United States’ roadway infrastructure is aging and has a backlog of $420 billion in repairs of our existing highways. Addressing these challenges and improving pavement conditions economically, motivates me to design and develop asphalt materials that last long.

Asphalt concrete is a mixture primarily composed of asphalt binder and crushed aggregates. It also incorporates fibers and other additives to enhance its performance. The design of asphalt concrete is like a recipe, unique for every geographical location, traffic, drainage, and available materials. It requires the right proportion of each of its ingredients (binder, aggregates, modifiers) to ensure the highest performance. The image reflects asphalt concrete brownie topped with asphalt binder, a sprinkle of yellow Sulphur pellets and white Sasobit (modifier), a garnish of polymer fibers on the top and hint of bio-based oil (modifier). The image is an abstract depiction of how asphalt concrete can be made with perfection by choosing the right ingredients, to overcome the poor pavement condition.