There are twenty acres on the southwest edge of campus that are lined not with perfectly symmetrical stripes of soybean or corn, but instead with rows of gleaming, beautifully blue photovoltaic panels. This field is home to our university’s largest solar array—18,867 panels that, on a sunny day, can yield enough clean energy to power the whole of Research Park.

Operational since December 2015, the utility-scale solar array generated nearly 2% of campus electricity needs in its first year, and will continue to generate power for the university for the next 40 years.

The push for large-scale clean energy on the Urbana campus originated with a student proposal for a wind farm that was thoroughly investigated but didn’t come to fruition. Nobody wanted to give up on clean energy, however, and so students worked with staff at Facilities & Services (F&S) to advocate for other possibilities. In 2011, the then-executive director of F&S proposed solar power, a source that would actually produce more clean energy for a similar cost.

“Our staff are thinking about the long term sustainability of our campus on a daily basis,” Morgan Johnston, director of sustainability for F&S, explained. “When we look at any project, we’re looking not just at the first year of what’s going to happen, but asking what does this do for our overall campus efforts, where will it be in 40 years, and how does it add to the work we’re doing for energy conservation.”

By using the energy collected from the solar farm, Illinois pushes toward its pledge of being carbon neutral by 2050, a goal set in 2008. This vision for increased sustainability was expanded in 2010, when students, faculty, and staff authored the first Illinois Climate Action Plan (iCAP), which has initiated over 500 projects to date, including the solar farm. iCAP serves as a roadmap, outlining specific actions for “meeting the needs of the present without compromising the ability of future generations to meet their own needs.” 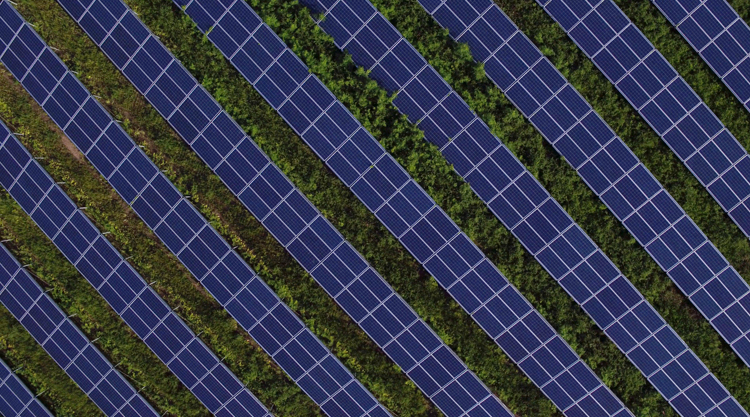 Planning for a sustainable future requires vision and effort, but it also requires a financial investment. At Illinois, students are among the most committed investors, contributing to the largest student-administered green fund in the nation. The fund’s revenue comes from two student-initiated environmental fees, and students alone decide the allocation of that money. The Student Sustainability Committee (SSC) regulates the fund, reviewing project proposals from the campus community and then allocating money to those voted most beneficial. The solar farm was the recipient of $1.05 million of student-contributed money.

“Sustainability is a mindset; it’s a culture change,” said Paul Couston (BS ’19), chair of the SSC. “As Illini, we have an innovative mindset, and we can come up with some really cool ideas for approaching problems. We want to see what we can do together.”

The University holds sustainability and the good stewardship of our natural resources among our highest priorities. If you or your organization would like to support solar efforts at Illinois, you can help build rooftop solar at the new Electrical and Computer Engineering Building.