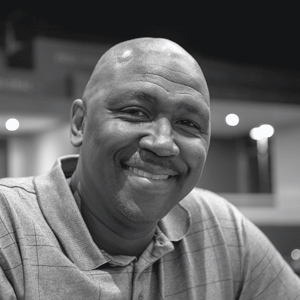 My basketball career has taken me from student player to coach to announcer. So, I’m going to tell you something I’ve learned from all three roles: Your fans are vital.

If you look at any university team with any success, they’re backed by a loyal fanbase who fill the stands with foam fingers, painted faces, and passionate cheers. They’re superfans.

I think the University of Illinois has a fan base that rivals any in the country. Many of our athletic programs are on a high after such a long time without winning. But even when we weren’t, we still had sixteen thousand people in the State Farm Center. The Orange Krush cheer from one of the largest student sections in the country. It’s in our blood.

Let me share a story about the time my grandmother came to one of my high school games. Someone asked me for an autograph as we were leaving, and my reply was, “I can’t do it right now. I’m with my grandmother.”

She looked at me and said, “You sign that. What are you as a player, if no one wants your autograph? Those people are important, and you never know who you are going to touch. So, you sign every single autograph when people ask you.”

And I have, ever since that very day.

Even now, my wife and my two daughters—exasperated—ask me do I really have to sign every single one?

Yes, I do. And I stop and I talk to every single person.

When the fans are supporting me, there’s a synergy.

If they’re not there supporting me, as my grandmother asked, “Who are you?”

What do the fans mean to me? They mean everything. Everything.

It’s been seventy-five years since she was a freshman clutching her Athletics Association card, scrambling for a seat at Huff Hall and seated in the Block I section at Memorial Stadium. It’s been fifty years since her late husband Paul landed on her endearing nickname. You can call her Shorty or Lila Jeanne, just don’t call her Mrs. Eichelberger. “Only elderly people call me that,” she said, laughing.

At 92, you won’t find Shorty (ACES ’49, ’52; EDU ’68) itching to join the Illinois snowbirds in Florida during the coldest months in Urbana-Champaign, when football and basketball games are going.

Instead, you will find her at every home basketball and football game—she’s had to cut back on the away games—as well at softball games, played at the field bearing her name.

Despite being known as the “mother of softball,” Shorty doesn’t play favorites among sports at Illinois.

“When people ask me what my favorite sport is, I say whatever’s in season.”

Regardless of whether the teams are on a hot streak or in a slump, she shows up.

“We’re not very good Illini fans if we don’t support them. I’ve been going since 1945, and I don’t come to the games to see a winner, necessarily. I prefer winning, but 50 percent of the people who go to games are going to see a loser. Somebody has to win, and somebody has to lose.”

When asked what she’s getting from attending all these games?

The origin story of Mr. Blue Hands goes something like this: Ceasar Perez (LAS ’06), a thirty-two-year-old Marine Corps veteran, enrolls at the University of Illinois in the early 2000s and undergoes a radical transformation in search of the ultimate college experience. Painted orange with blue designs from the torso up, and green Hulk hands now Illini blue, Ceasar joins the Orange Krush outside State Farm Center (then Assembly Hall) in December of 2004. They have been camping out for days waiting to take the stands to support No. 3 ranked Illinois against No. 1 Wake Forest. (We won, 91-73.) Mr. Blue Hands’ debut that evening was the first of many appearances at home and away games and soon became a favorite sighting of thousands of Illini fans. He created what would become a decades-long fascination with and admiration for the man, the hands, and that loud, rabid growl.

“I’m just a fan who really gets into it and gets passionate about it. I love jumping up and down and getting people excited. I love Illinois, and I want people to get excited about us,” Perez said.

At forty-seven, he concedes that nobody wants to see a “half-naked Ceasar,” but he’s still a regular at games with his face painted and his hands pumping. Although, now he’s starting to think about how to involve his two young children, who are only three and four years old.

“You have to support all Illinois teams, not just the highly visible ones,” Ceasar said. “We have national-championship-caliber programs—like one of the best volleyball squads and wrestling teams in the country, one of the best golf coaches, and wheelchair athletes that are competing at the Olympics.

“It’s no surprise that we’re seeing things turn around for football and basketball,” Ceasar added. “Outstanding leadership creates a successful culture, and we are leaders in both academics and athletics here at Illinois!”

Walk around Colton Rahn’s Tuscola home, and you’ll find Fighting Illini memorabilia nestled in every corner, hung on every wall. Step into his room and every surface is occupied by more of the same—signed football jerseys, autographed photographs, gloves from last season’s scrimmage, all given as gifts to Colton from Illinois student athletes. Colton has a unique relationship with the athletes, born out of mutual respect and admiration. He’s only eleven and has been defying odds and surpassing expectations since he was diagnosed as baby with cerebral palsy and epilepsy.

Mike approached Colton and his father, Jason, on the sidelines and struck up a conversation at a spring practice session the two were watching.

“I think he connected with Mike because of all the work Mike had to do to get back on the field after his injuries. It was very similar to the work that Colton had to do to be able to be where he’s at,” Jason said. “Colton’s doing everything that the doctors said he would never be able to do.”

Colton and his family are regular fixtures at Illini home games. In fact, athletes from all sports have reached out and lent their support, especially when Colton has had a couple of medical scares.

Now Colton has become the fan around whom the athletes find themselves cheering.

Yet, if anyone bleeds orange, it’s this fifth-grader.

Simply put, Colton said, “I just want to be there for the boys.”

Show up at any home women’s basketball game, and you’ll find Stacia Simmons (AHS ’19) seated court-side by the home net. She scored these enviable seats along with her Illinois Promise mentor Dr. James Dobbins. She was paired with Jim because of their shared interest in basketball (really, Illini sports in general) and medicine. Stacia plans to pursue a career in infectious disease, specializing in HIV transmission. Jim’s mentorship is rooted in his career as an epidemiologist with the Centers for Disease Control and the World Health Organization. Their friendship is cemented by rooting for the team. The 25-year-old master’s student in Public Health is continuing a tradition her parents started when she was a young child growing up in Champaign.

“We used to go to all the games—men and women. That really got me started with the love of the game,” Stacia said. “I used to have a poster of the women’s team in my room.”

Even though she’s juggling a demanding degree, caring for her young son, and working, Stacia still finds the time to cheer on the women.

“Jim and I go to the banquets together as well as the games,” Stacia said. “It feels just like family.”

The Campaign for Fighting Illini Athletics