Hearing and healing the mothers of Englewood – Storied.
Skip to content

Englewood is home to 30,000 residents on Chicago’s southwest side. Within its rich and complicated history, there are stories of population growth and decline, of shifts in demographics and commerce, of racist policies that made it impossible for many Black residents to own property or build wealth. There are also stories of children riding their bikes with friends, neighbors gathering in parks, grandmothers bringing food to those who need a hot meal. In recent years, this love and joy and sense of community has lived alongside fear and poverty and violence.

Even though no community can be defined by only one aspect of its experience, one of the most common stories told in the media about Chicago over the last few decades is about the violence so prevalent on its streets. Englewood rates in the top ten most violent neighborhoods among Chicago’s seventy-seven named community areas.

“There’s this high level of excess black death, people who are dying prematurely. From these statistics, we know your zip code is more important than your genetic code,” said Ruby Mendenhall, a professor of sociology and African American studies at Illinois.

Ruby’s research is taking her beyond the headlines and into the community itself. Specifically, Ruby wants to understand the story of Englewood’s mothers—those who have lost children to gun violence, and those who worry one day they will.

The trauma of gun violence extends far beyond what a bullet can do to a body. The grief and stress incurred by the loved ones of those who lose their lives also result in grievous injuries, and their pain lingers long after the police tape is removed. Ruby’s research has found that among mothers in her study who live in neighborhoods with high levels of violence, 48% of the women reported depressive symptoms and 56% exhibited symptoms of Post-Traumatic Stress Disorder.

A lot of research has been done on the physical effects of stress, but Ruby is particularly interested in the long-term effects of the type of chronic stress experienced by women in communities like Englewood. What happens to a parent when the sound of gunshots is common during the day, and especially at night?

“Some women I’ve interviewed talked about jumping on top of their kids when the bullets are flying, or keeping them very close because it is not safe enough to play outside,” said Ruby. “Mothers report that the need to constantly protect children and keep them inside the house creates more stress because developmentally, their children want to be outside playing and exploring their environment.”

And even then, there is no guarantee your child won’t be caught in the wrong place at the wrong time.

“One mother whose child was murdered told me, I did all these things, and I tried to keep him safe, and I just wasn’t able to,” she said. “It makes a community vulnerable when parents don’t have the resources they need to take care of their children and to ensure their well-being.” 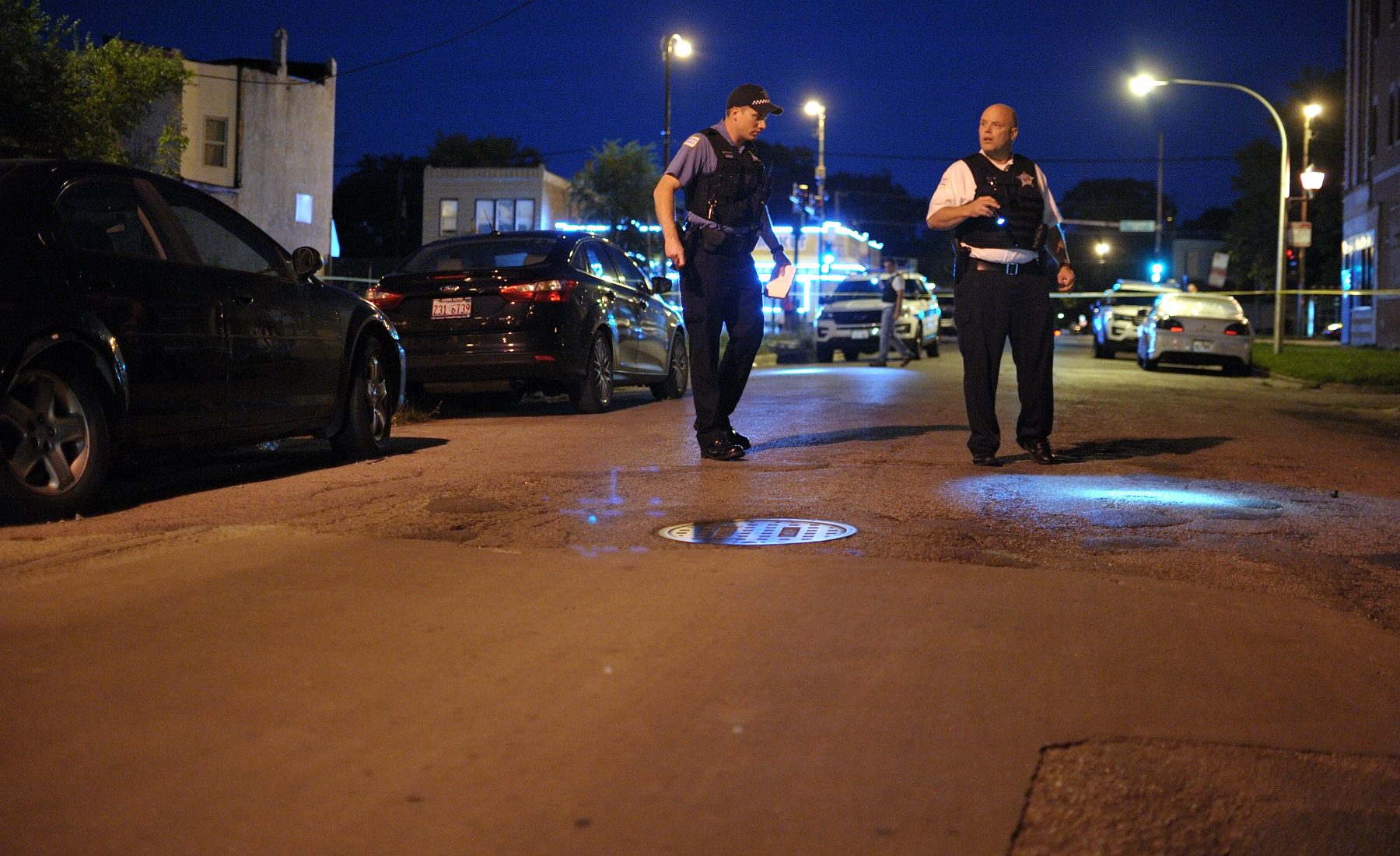 “Mothers who have lost their children to gun violence are finding themselves in an in-between space. Some of them report feeling like they are themselves dead, even as they show up every day to work or to care for their other children. They describe a tremendous pain that is as physical as it is emotional. Their grief is for their child, but also for the community because they know their child is not the first and that others may lose their lives.”

Ruby started her career as an occupational therapist in the pediatric unit at Cook County Hospital in Chicago. During her time there, she helped many babies who were underweight or exhibiting developmental delays. Many of the mothers she spoke with about their children failing to thrive told her they didn’t have enough money for formula, so they had to water it down. Many mothers were also afraid to put their babies on the floor to play because of rats and roaches in public housing communities like the Robert Taylor Homes.

Working with women and families experiencing extreme poverty motivated Ruby to enter the world of public policy, eventually earning her Ph.D. from Northwestern in human development and social policy. It was there that she began researching the effects of the deliberate discrimination to create segregated housing by the Chicago Housing Authority on Black women’s economic health and opportunity.

Despite her policy work and research, however, she wanted to return to working directly with the women she intended to help. “I wanted to do that because as we had policy meetings and as we strategized, I recognized that the voices of the mothers who were in poverty, the women who were struggling, weren’t at the policy table,” she said. 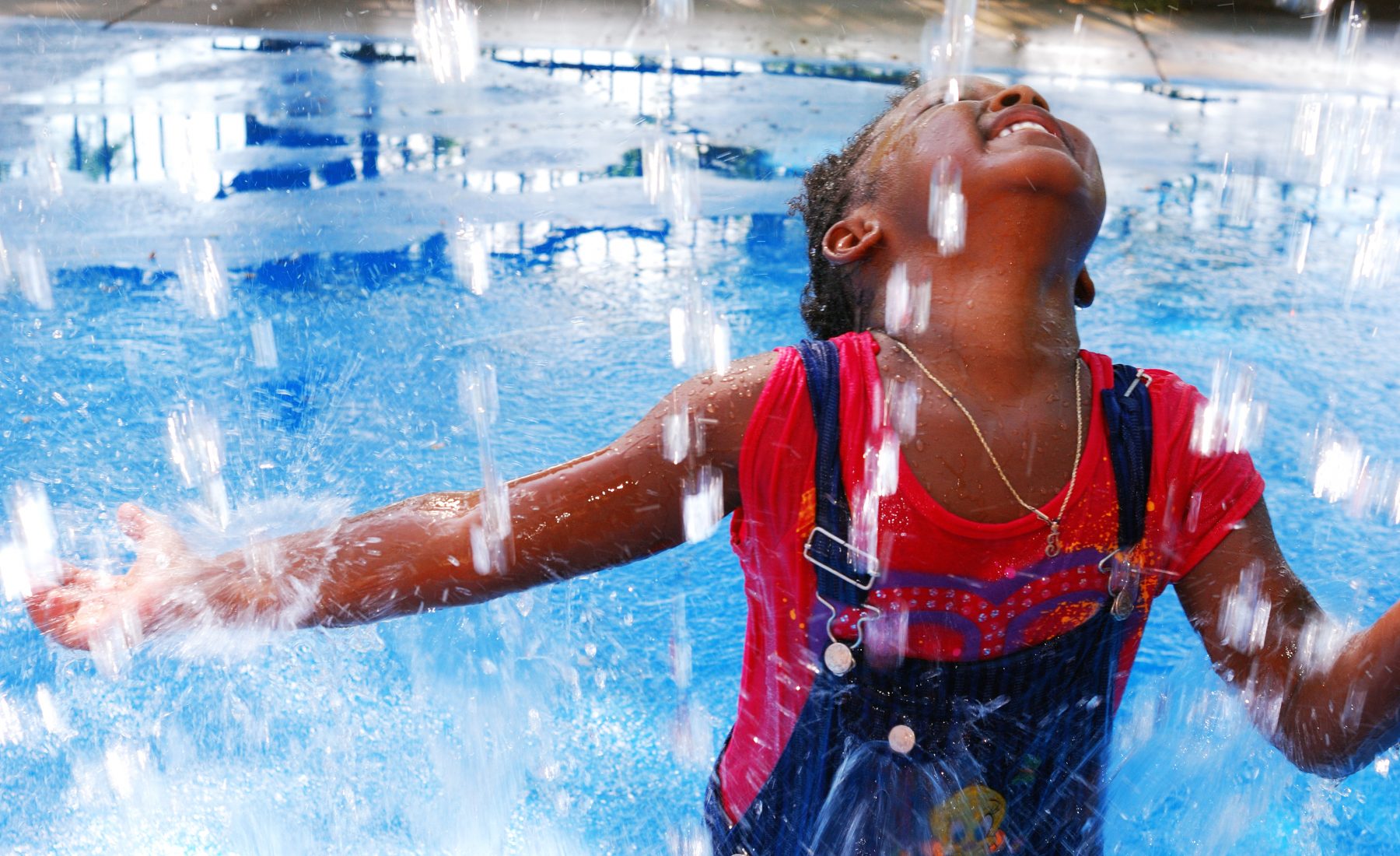 Ruby spent two years in the late 1990s working in the Robert Taylor homes, a public housing project built in the early 1960s and ultimately demolished in 2007. She gained an intimate understanding of how families coped living with poverty and among extreme violence. During that time, the buildings would have to be shut down when rival gangs would open fire on one another. Ruby once had to call the job of one of the mothers she was working with to let her employer know she wouldn’t be able to come in that day. “I’m on the phone and I’m telling him that she can’t come in, that there is a gang war and her building is shut down,” Ruby said. “And he said, ‘A war? What do you mean? We’re not at war. Why can’t she get out of the building?’”

His inability to comprehend the violence experienced in his employee’s neighborhood illustrates perfectly what Ruby calls our “Hidden America,” a term taken from an investigative series that appeared on ABC. In a paper published on the topic, Ruby and her co-authors, using ABC’s definition, describe it this way: “The Hidden America is an America in which violence experienced by families, mostly those headed by single African American women, is unfathomable to most of the country.”

What Ruby is finding in her research truly is unfathomable. She has spoken to women who can name dozens of friends and family members who have been shot or killed in Englewood. The mothers tell her stories of busses filled mostly with women and children taking gunfire at seven in the morning.

“It’s not like it is one terrible event and everybody is surprised it happened,” she said. “This is the normal. Monday, Tuesday, Wednesday, Thursday, Friday, Saturday. Sunday.”

Ruby is forging connections throughout the Englewood community, partnering with different groups such as I Grow Chicago, A Knock at Midnight, and the Faith Community of Saint Sabina to write grants, develop programming, and continue her research on women’s health and wellness.

One of the residents Ruby has connected with is Tonika Johnson, the program manager for the Resident Association of Greater Englewood (R.A.G.E.), which she co-founded with twelve other residents in 2010. As a photographer and community arts activist, her photographs capture the fullness of life in Englewood. “I want people to understand that there are a variety of lifestyles in Englewood. The narrative shouldn’t be driven just by the violence. That violence does exist and everyone is impacted by it, but the reason that we are able to be resilient is because regardless of your experience here, there is a sense of community.”

This sense of community, Tonika believes, sets Englewood apart and is what has allowed a vibrant group of organizations to flourish, each committed to bringing resources to those who need them.

“We talk about the vulnerability and the challenges of Englewood, but there also is resiliency,” said Ruby. “People are raising beautiful and loving children. Through her photographs, Tonika captures the spirit of the neighborhood.” 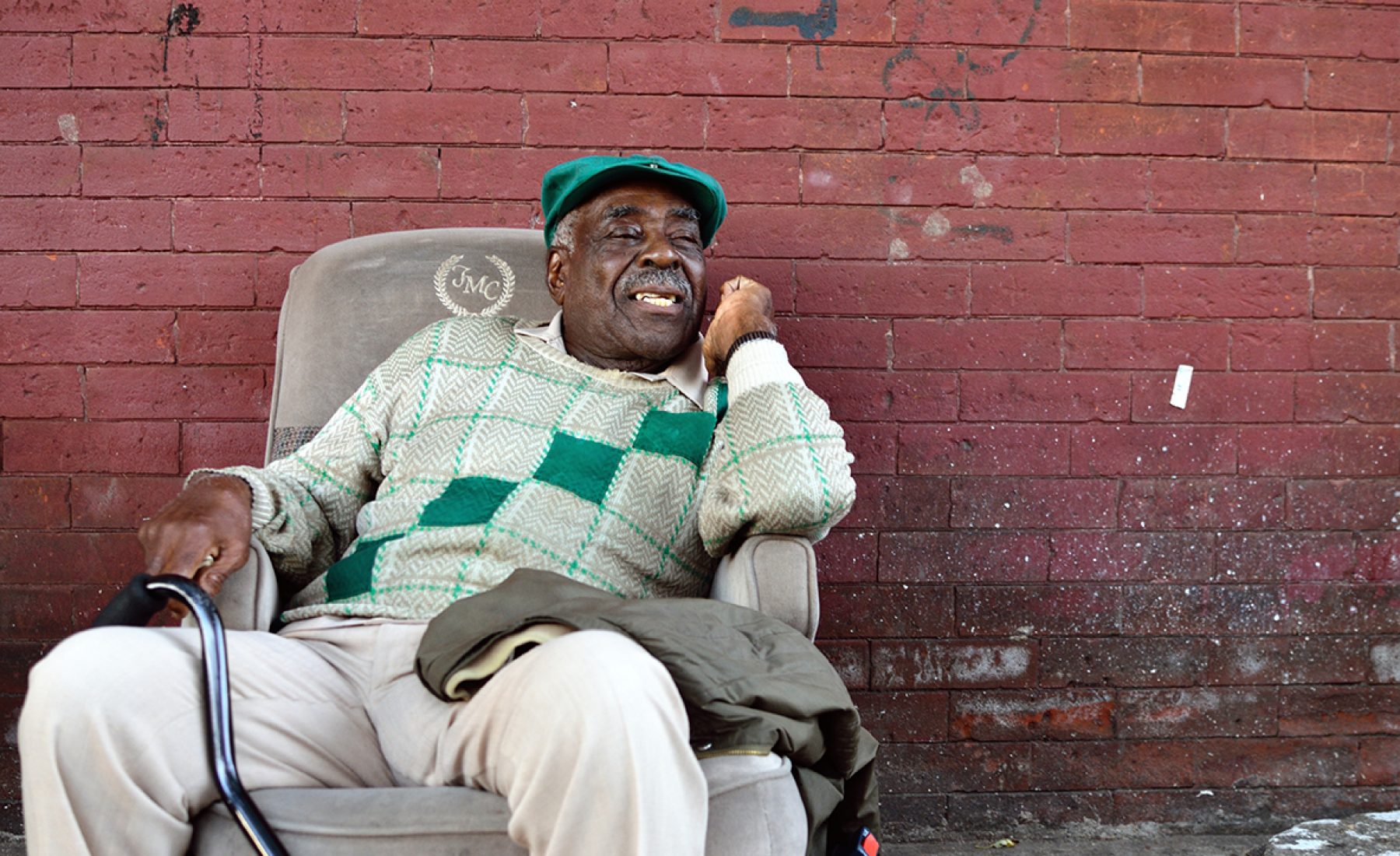 When tragedy does strike and another life is taken, the community gathers around the family, especially the mothers. “These mothers are held in a special place as a person in the community that needs to be treated delicately and be taken care of emotionally,” said Tonika. “It’s just kind of an understanding that not only do the people who know those women tend to them in the grieving process—helping them prepare for the funeral process, prepare the food—but others in community do, too. People watch out for the mothers, to make sure that they’re okay and assist them with anything that they need.”

Englewood is quickly becoming a neighborhood from which other communities who are struggling with gun violence are drawing inspiration. Leaders in the community are spreading the word about the groundswell of good work that is being done by residents who are developing and distributing resources to those in need.

“The work that Ruby is doing and that other people and organizations are doing to solve some systemic issues that communities like Englewood face is really important. My contribution to addressing those issues as an artist is to create work and offer a space where things like motherhood can be recognized and exalted prior to the mothers being a victim of something,” she said. “Because I’m sure the mothers who have experienced their children passing from violence would have loved the opportunity to share happier moments or celebratory moments with the world while their child was alive.”

As Ruby explains, “It is our connected humanity that’s at stake.” 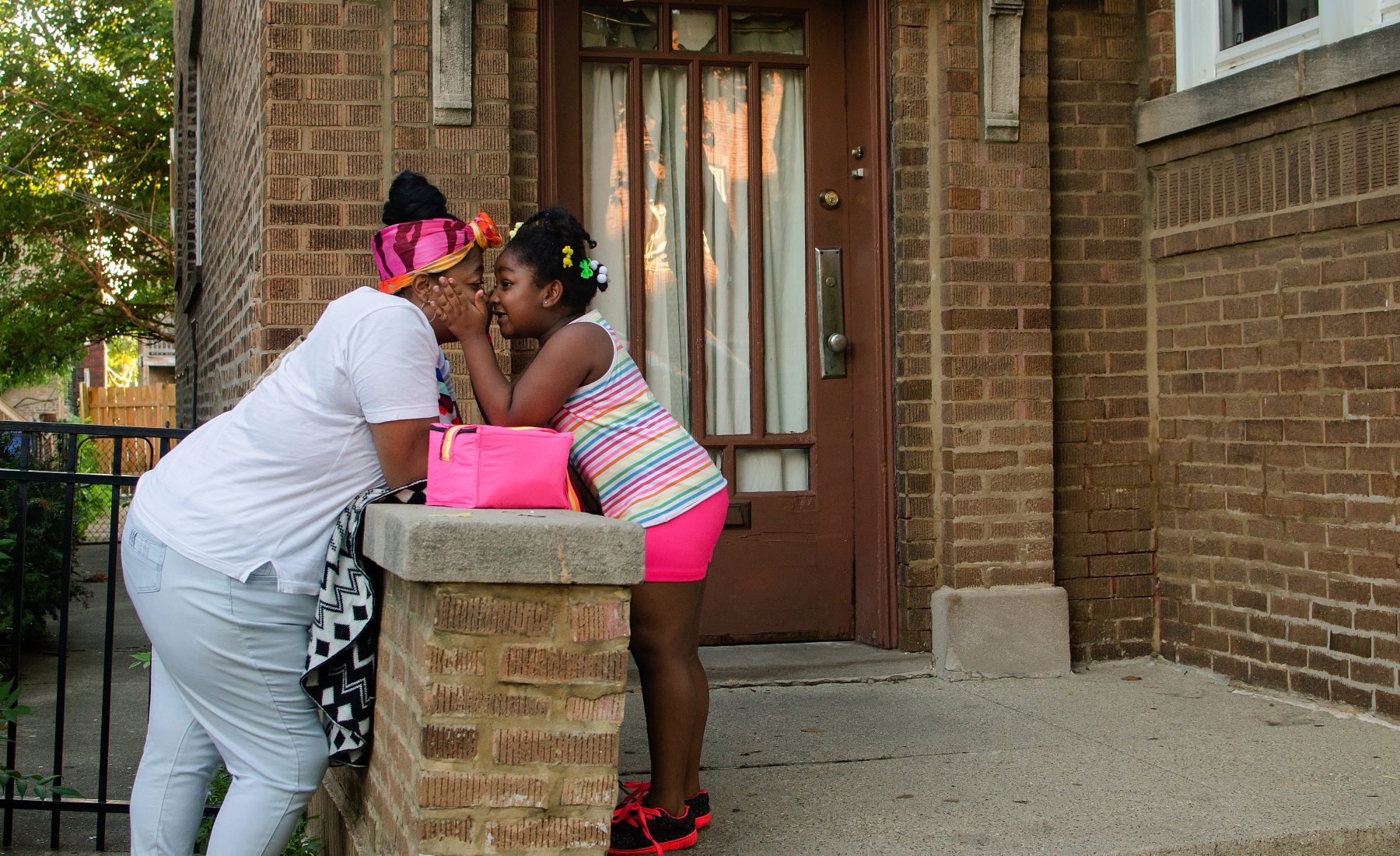