From a tiny island hundreds of miles to the nearest city, David Bozman launches his patrol boat and heads out into the open ocean. He sidles up to trollers hauling salmon from the sea, subtly reminding crews to respect their quotas. Later, he might find himself cruising down wooded trails atop an ATV, checking in with moose hunters and ensuring only certain animals are taken.

The natural resources and environmental sciences (NRES) alumnus is one of 90-odd Alaska wildlife troopers who brave the elements every day to protect the state’s iconic wildlife and natural resources. And last February, another Illinois graduate—Colin Nemec—joined the force.

Nemec and Bozman met on their first day of classes in 2010. “All the NRES kids go through their first few classes together,” Nemec explains.

Bozman applied to Illinois on the GI Bill, having served as a nuclear mechanic on submarines through three tours of duty. After living and working in such tight quarters, Bozman knew he wanted a little more space in his next job.

“I’ve always wanted to work outdoors, and when I researched different programs, NRES seemed like the program that would best prepare me for that,” Bozman says. “I only applied to one school.”

Both men took as many field courses as they could, learning ecological and biological principles as well as real-world techniques for monitoring wildlife and the environment. But they took away more than those specific skills.

“Most of my professors got me to think more critically, and many of the classes, like plant identification, taught me to be very meticulous, to look for little details. The coursework was very rigorous in general, because of the quality at Illinois,” Nemec says.

The two stayed in touch after graduation, when Nemec went to work as a wildlife firefighter in California and Bozman started his job in Alaska.

“Talking with Dave about life up there, I kept thinking, ‘Man, that’s awesome. I wish I could do that.’ He eventually convinced me to apply, and now here I am,” Nemec says.

Working with people to protect wildlife

Wildlife troopers do all the work of regular state troopers, but their focus is on enforcing laws that protect Alaska’s wildlife and habitat. With only 90 of them to cover all of the state’s 663,300 square miles, there’s rarely a moment’s rest.

Initiates like Nemec spend a year learning the ropes as state troopers: answering calls, investigating car accidents, and generally training to deal with the human side of the equation. That’s crucial, because the job is a lot more about people than it is about getting up close and personal with animals.

Bozeman may respond to calls about bears on a regular basis, but he says the situation is (usually) about chasing the animal away. Instead, his primary goal is educating people—giving them the tools they need to live with wildlife in their midst, like “taking preventative measures to avoid attracting the bears and different techniques to scare the bear away if needed.” 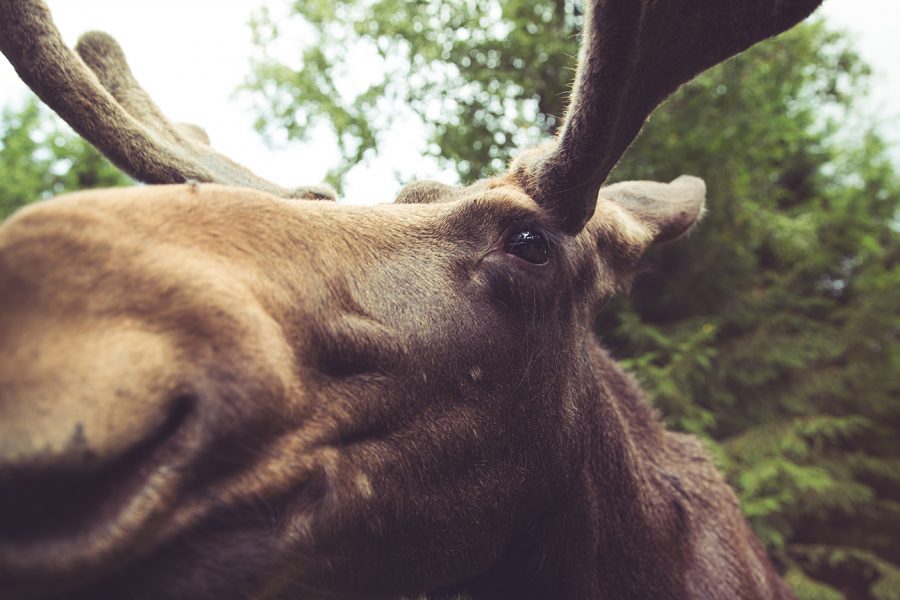 Of course, there is the occasional close call, like the time Bozman was nearly taken out by an angry moose. “A moose calf had been hit by a car and was still lying in the road. I’m dragging the calf off the road when the mom decides she doesn’t like it. She comes charging at me.

“I was watching the road because I didn’t want to get hit, and I didn’t realize the moose was coming for me. A car going by sees what is happening and starts honking, flashing the lights. I got back to my truck and was able to get away safely. She was probably 15 to 20 feet away.”

Fishing is big business in Alaska. In 2017, the salmon catch alone exceeded more than 1 billion pounds and was worth nearly $680 million. Bozeman says most of the commercial operators play by the rules, but that’s due, in part, he says, to the presence of wildlife troopers.

“They know I’m going to be out there and they never know when I’m going to appear,” he says. “We see commercial operations trying to exceed the quota for a particular fish so they can sell more and make more money. If they’re hiding fish, or taking fish that are too small, it takes some effort to figure it out.”

“Hunters aren’t allowed to take breeding moose—there are certain antler configurations to look for,” Bozeman says. “One hunter accidentally took the wrong moose recently and turned himself in. In that case we worked with him. The meat went to charity, and we seized the antlers and gave him a citation.”

Bringing a NRES education to Alaska

Growing up in Illinois may not have prepared Bozman or Nemec for their now-frequent encounters with moose, salmon, and bears, but their NRES education laid the right foundation.

“That fundamental biology knowledge comes in handy when I’m explaining the reasoning behind particular wildlife regulations, like why hunters aren’t allowed to take breeding moose or why commercial fishing operations need to stay within their quotas,” Bozman says.