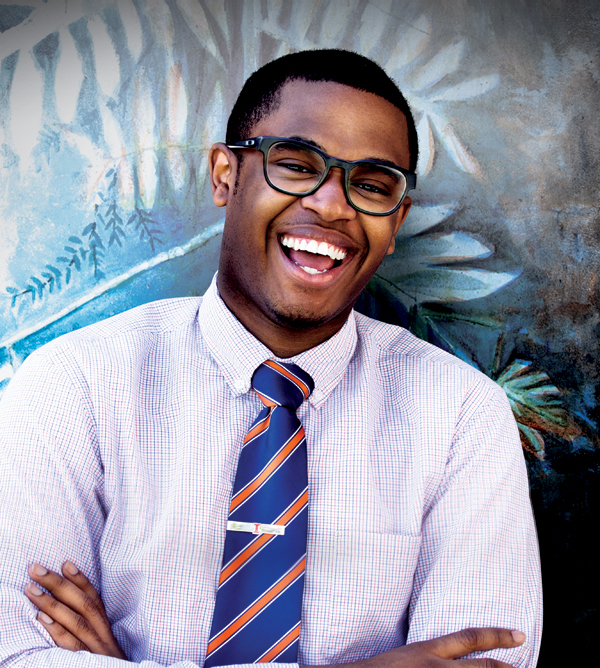 Nick’s joy is infectious. With his inviting smile and exuberant energy, you can’t help but feel good when you’re with him.

He is also an Illini, through and through. I strongly suspect that if a human could actually bleed orange and blue, Nick would be the one to surprise the phlebotomist.

It would be impossible to list all of Nick’s activities and accomplishments while at Illinois: he was a Greenhouse Scholar, member of the Senior 100 Honorary, active in Student Alumni Ambassadors, Mr. University of Illinois 2014, recipient of the 2016 Chicago Illini Club Excellence in Leadership Award…the list goes on and on.

And while those accomplishments are surely a source of pride, what stays with you long after you meet Nick is his enthusiasm. His genuine love for a campus that supported him, and for his family who inspires his pursuit of improving public health.

Nick first came to Illinois his sophomore year in high school through ACES’ Research Apprentice Program, where students can participate in research and learn about various career paths. He had already lost his maternal grandmother to diabetes when he was 7, and was 16 when his paternal grandmother passed away from kidney failure. Inspired by their experience and by his desire to help people live healthier lives, he quickly found an academic path to pursue.

Nick graduated in 2016 with his degree in Food Science and Human Nutrition. Now employed as a regulatory specialist with Greenwood Associates, Inc., he ensures that all the company’s beverages meet FDA standards. He plans to return to campus in two years for graduate school, where he will focus on food safety and public health, specifically searching for solutions to the childhood obesity epidemic.

“I have been provided the opportunity to make an impact and build a legacy as a first-generation college student, as an individual who has emerged as a selfless leader,” he said. “I never knew that I was worthy of accomplishing so much and making an impact on others’ lives, but Illinois has taught me that possibilities are truly endless.”