Illinois Professor Ruby Mendenhall stands to the right of the podium cradling a fidgeting one-year-old baby. Behind the microphone is his mother, twenty-six-year-old Natasha Williams.

Ruby and her research team are hosting this event in Englewood to share their research with the community and provide a platform for the women she has spent this past year learning from on the South Side. Through a series of installations and talks, the women saw their lived experiences represented artistically through paintings, heatmaps, and virtual reality demonstrations.

Natasha addresses the audience and calmly recounts one of the worst—if not the worst—days of her young life.

On July 17, 2017, when she was thirty-six weeks pregnant, the father of her unborn child was killed. That same day, as the stress overwhelmed her, she went into labor. Doctors were able to stave off the delivery for nine days, but in the time she spent waiting, she stopped eating and sleeping and became weak.

Shortly after her son was born, she developed postpartum pre-eclampsia, her lungs collapsed, and she started having seizures.

“That caused me to spend another week and a half in the hospital away from my child because of all the stress that was put upon me,” Natasha explains to the audience. “And I just wanted to tell you that stress is real and stress can kill—because I almost lost my life to it.”

Ruby has heard this before. Her research has focused on black women’s health disparities, and she has been examining the effects of stress on women in Englewood.

Ruby has taught sociology and African American studies at Illinois for over a decade, but before that, she began her career in her hometown of Chicago. She worked in pediatrics at Cook County Hospital and in the Robert Taylor Homes public housing, where she witnessed the effects of gang violence on the everyday lives of the residents. This led her to pursue graduate studies in public policy at the University of Chicago as well as human development and social policy at Northwestern University. 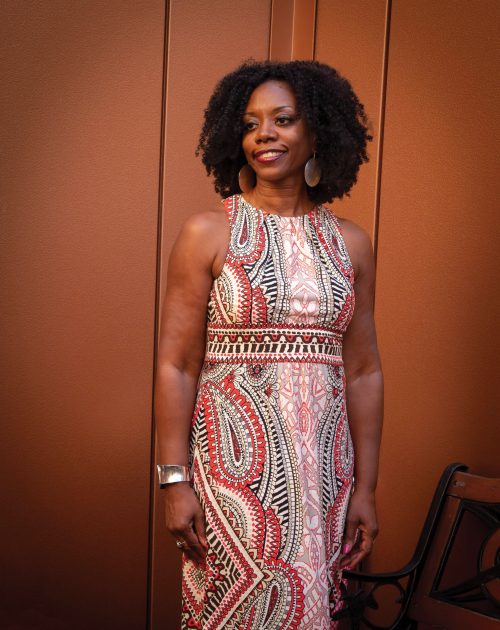 Now she brings all of these experiences to her position as the assistant dean for diversity and democratization of health innovation in the Carle Illinois College of Medicine, the world’s first engineering-based medical school.

In this role, Ruby draws upon her extensive research and works with her colleagues to develop humanities and social sciences curriculum, create diversity initiatives, conduct health and well-being research, and build programs to make sure that the innovations developed by Carle Illinois students are accessible to everyone.

“We’re creating connections to Chicago and other cities so that our students can interact with different communities and get information about what it means to be sick or well in the U.S.,” says Ruby. “That involves understanding a lot of different cultures and different beliefs. We’re making sure Carle Illinois is as welcoming and open as possible.”

INNOVATING WITH THE COMMUNITY IN MIND

The inaugural class of thirty-two students is being asked to learn about complex human systems—how to care for them and how to innovate for them.

The goal is to educate physician-innovators who go beyond basic care and move toward innovating with compassion, curiosity, and inclusivity. They will find a place within these systems both biological and sociological—to use their medical engineering expertise to improve and even save lives. Ruby shares the college’s vision to teach students how to use technology to build robust and accessible medical inventions, so that ultimately the quality of care can be improved for everyone.

Ruby’s work starts with the community. The high levels of violence in Englewood are well-known, but what Ruby wants to know is how much influence this violence has on the health of residents in the neighborhood. Over a thirty-day period, Kiel Gilleade, a research programmer at the National Center for Supercomputing Applications, with help from Meggan Lee and other team members, measured the stress levels of twelve women as they moved throughout the day.

The researchers combined data from a wearable heart monitor, GPS, and 911 calls about shots fired to see what relationship nearby criminal activity had on the women’s heart rate and other measures of health, such as sleep patterns. The research is ongoing, but preliminary data combined with the women’s written diaries captured moments of stress induced by crime and showed how researchers can use new technologies, such as virtual reality, to capture the lived experiences of black mothers on the margins of society. Many visitors to the exhibit reported gaining a better understanding of what it is like to live in communities with high levels of violence or what has been described as a “hidden America.”

It is important to Ruby to record the women’s experiences and honor the time they spent helping her draw a more complete picture of how external stressors can have internal consequences. Her event in Englewood, “How Gun Violence Affects Public Life and Public Health,” was a chance for researchers and the community to come together. Ruby works with several individuals and organizations in Chicago, including Tennille Allen at Lewis University, BarBara Scott at Northeastern Illinois University, Lisa Butler at herVoice Films Inc., A Knock at Midnight, I Grow Chicago, and The Faith Community of St. Sabina.

In addition to her rewarding work embedded in the community, at the university Ruby crosses many academic borders pursuing her research, resulting in truly interdisciplinary partnerships. She works with genomic biologists, computer scientists, art professors, and historians, among others.

She is partnering with renowned scientist and Director of the Institute of Genomic Biology Gene Robinson to gain a deeper understanding of how stress affects health—and whether those effects reach the genome. Gene may sound like an unlikely partner—he is an entomologist whose research focus is honey bees—but the collaborative nature of the campus led him to look outside his field for partners in his research.

“Our discoveries led me to propose a new model of the nature-nurture problem that emphasized the strong role of the environment in affecting brain gene expression,” says Gene. “I thought it could be important to engage a social scientist to explore the implications.”

Christy Lleras, a professor of human development and family studies at Illinois, has been working with Ruby since meeting her at an event several years ago. Trained as a sociologist, Christy had worked on public policy around desegregation and other issues.

She’s motivated by Ruby’s style of research, which involves buy-in, outreach, and follow-through with the community, in contrast to “extractive research” that involves just going in, collecting data, and leaving.

Chicago’s low-income population is the “most studied poor population in the world, and relatively little has changed in their lives,” Christy says. “So there’s a real motivation for a lot of us to do something differently now.”

Ruby’s new role builds upon years of sharing knowledge between the university and communities and offers Carle Illinois medical students a rich and essential view of how our environment can have profound implications for our health.

“When you’re on the margins of society, your lived experiences very rarely make it into the academic journals,” Ruby says. “It makes it into the news, in terms of stereotypes and things like that—but rarely does that tell about who you are, your strengths, how you are trying to combat this violence, how you are raising beautiful children despite all of this, how you crumble when your children die, after you do everything you know to do and your child still gets caught in the crossfire.

“We can change this as a country and we must.”