Keeping the peace in a city on fire – Storied.
Skip to content

IN 1871, THIS MILITARY COMPANY OF ILLINOIS STUDENTS received orders to help keep the peace during the chaos of the Great Chicago Fire. At the time, military training was required of all male students, and so this group of men joined the full battalion of 157 Illinois students who made their way to the burning city, outfitted with bayonets and old army rifles.

According to Dillon, the men were too excited by the orders to think to bring food or blankets for their stay, and by the time they arrived they were “a mighty tired, hungry bunch.” After securing a meal at the West Side Rink— temporarily transformed into a supply depot at West Randolph and Ada streets—the men spent the next three days moving around the city to relieve other units on duty. Dillon recalls panicked people in the streets lining up at churches and public buildings seeking shelter. He remembers the sight of bread trucks driving down the scorched streets, volunteers tossing loaves over the side to hungry and desperate people.

As they made their way over burnt pavements and cobblestones, the students could see nothing but “smoking and smoldering ruins.” The devastation was bewildering. It is thought up to three hundred people died in the catastrophe that leveled an area stretching four miles long and one mile wide. Over 17,500 buildings were destroyed, leaving nearly one-third of the city’s residents homeless.

In the end, the arrival of rain extinguished the remaining flames and revealed a devastated city. Joseph Medill, publisher of the Chicago Tribune, rallied Chicagoans the next day with an editorial, urging them to rebuild their city, because surely “Chicago shall rise again.” The famed publisher became mayor of Chicago that very year as a candidate of the short-lived “Fireproof ” party. 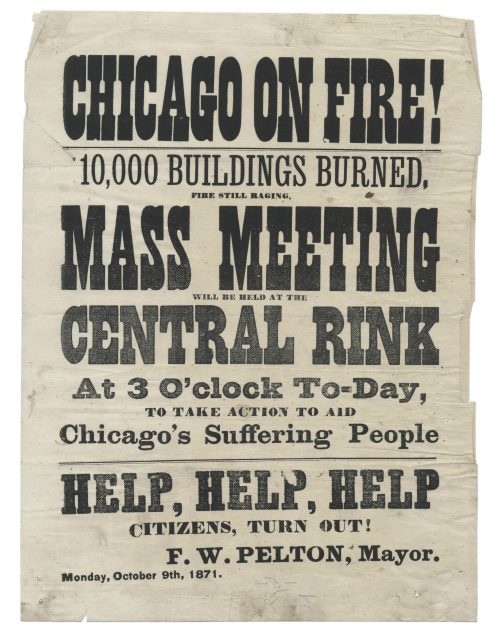