The Illinois Storytellers series brings you first-person pieces from distinctive Illinois voices. Ed Jackson, Jr. (FAA ’73), who spent fifteen years as chief architect for the Martin Luther King, Jr. National Memorial, shares insights into how he and his team brought the memorial from the original vision to its permanent place on the National Mall. Jackson is the president of ArchD Consulting and is currently working on his memoirs. 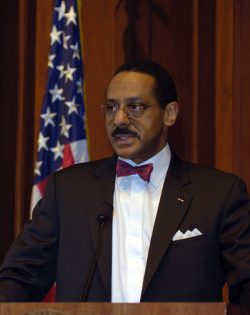 I recall my first visit to the Lincoln Memorial nearly fifty years ago. I was in awe of its scale, art larger than life. The words of Lincoln engraved on the walls—words that I had committed to memory since grade school—left me spellbound.

Many years later, I returned to the National Mall to visit the Vietnam Memorial and was emotionally overwhelmed by the simplicity of the memorial and shocked by the realization of the magnitude of the loss of life it represented. I wanted the King Memorial to strike a balance between these two emotional responses/experiences—the awe factor of scale and a soul stirring message about who we are and what we stand for as Americans.

The legislative initiative seeking Congressional approval of the project took thirteen years (1983 to 1996). My involvement began in November 1996 and lasted through the completion of the memorial in 2011. During the planning process, the size and composition of the team grew. At the height of the project planning and development, the staff numbered fourteen, along with an army of consultants. We were committed and determined to have the words of Dr. King become an everlasting ethos of America.

On one visit, after the memorial was completed, I recall a 90-year-old Catholic nun brought to tears as she rounded the Stone of Hope and looked up at the face of Dr. King. When I looked at her, I struggled to keep my emotions in check. She said, “I never thought this would happen in my lifetime.”

In order for America and the world to experience the American Dream Dr. King so eloquently spoke of, it will take both love and justice. It was the team’s hope that the memorial could somehow speak—literally and metaphorically—to future generations about the importance of peace, justice, democracy, hope, and love.

“If we are to have peace on earth, our loyalties must become ecumenical rather than sectional. Our loyalties must transcend our race, our tribe, our class, and our nation; and this means we must develop a world perspective.”— Martin Luther King, Jr., 1967