This audio edition of curiosities explores not only what we can see but also what we can hear. 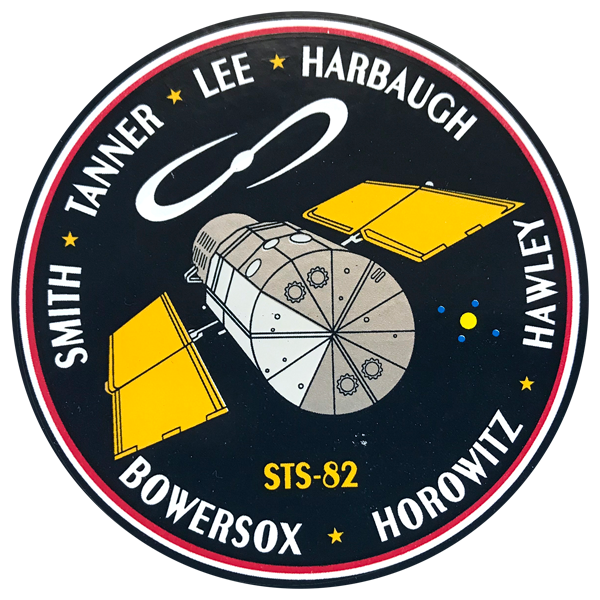 Marching with the stars

This patch appears on a certificate presented to the university by Joe Tanner (ENG ’73), recognizing the ten-day, 4.1 million-mile journey the music of the Marching Illini made aboard the Space Shuttle in 1997. When Joe wasn’t working long hours as part of a seven-astronaut team sent to make repairs and upgrades to the Hubble Space Telescope, he found time to pop on headphones to his Sony Walkman and cycle to his alma mater’s marching band. That mission, STS-82, set the record for the highest altitude of any Shuttle flight in its thirty-year program, meaning that Marching Illini have been farther above the surface of the Earth than any other marching band.

“I like marching tunes and who doesn’t,” said Joe, a Danville native, in a recent phone call. “Give me a good Sousa tune and I’ll be happy. It has a nice beat and keeps you on time on your bicycle.”

Joe flew on four Shuttle flights between 1994 and 2006, and was sure to bring a variety of music on each of them—cassettes in the beginning and later CDs. Each musical selection was meant for particular moments while in orbit, like mellow music for gazing out the window or Christian music for inspiration.

During each of his missions, Joe discovered a heightened appreciation for sound, which he attributed to the absence of other senses. While in space, Joe explained, the lack of gravity causes fluids to build up in an astronaut’s head, dulling the senses of taste and smell, a feeling similar to having a heavy cold.

“You can see the ground as it’s going by but you can’t touch it, smell it, feel it. It’s just there visually, and is too far away to really engage with. You can’t get pleasure from food or beverages because they just don’t have the same zing,” Joe recalled.

“Maybe it’s because everything else is deprived,” Joe said. “I think all of us (astronauts) would universally agree, that music was just as good, if not better, than it is on Earth.” 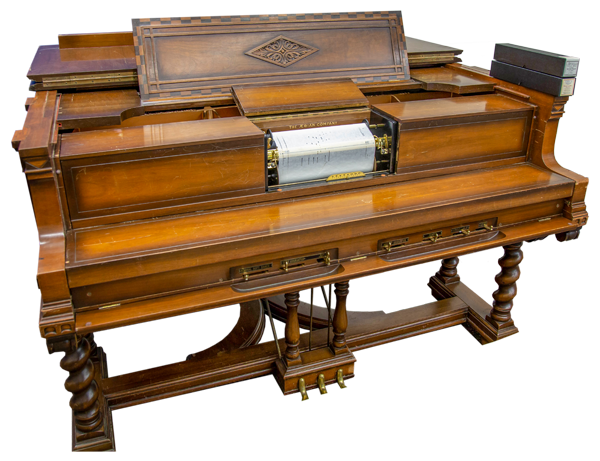 This 1927 Steinway Duo-Art reproducing—or player—piano resides in the Music and Performing Arts Library (MPAL) after a lengthy two-stage restoration process. When it’s plugged in (yes, it needs electricity) a roll of perforated paper loaded onto a turning drum communicates via air flowing through tubes and depresses the keys—a live concert performance without the need for a musician.

“When you think about it,” Kirstin Johnson, head of MPAL said, “with a phonograph or a CD, a machine plays the music back. But with a player piano, it’s the instrument playing.”

Player pianos were popular in private homes at the turn of the century and many had the ability to adjust the volume to project over the dancing guests. However, by the start of WWII, radios became an affordable substitute for people and interest in the player piano dwindled.

Not all musicians were thrilled that their playing artistry could be duplicated by an unmanned instrument. The “March King” John Philip Sousa was opposed to any mechanized version where something else was making the instrument work. Yet, some musicians, like Igor Stravinsky recorded music on them. Compositions specifically for player piano came much later with composers like Conlon Nancarrow, who died in 1997.

“It’s a terrific teaching tool,” Kirstin said. “It allows researchers and students to learn about this early mode of music technology because that’s what it is, early recording technology.” 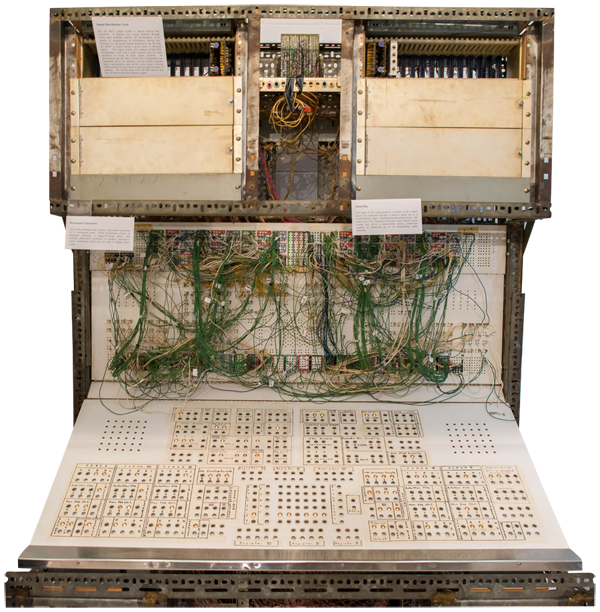 Assembled from discarded ILLIAC II machine parts in 1972, this hulking mass of metal and wires known as the Sal-Mar Construction is named after Salvatore Martirano, an Illinois music composition professor who, along with several engineers, designed this ambitious, experimental musical endeavor. The Sal-Mar was the first of its kind to integrate digital and analogue sound generation circuitry at a time when the technology was in its infancy. It has resided since 2006 in the Sousa Archives & Center for American Music.

“You know the Sal-Mar is all absolutely instant and contemporaneous because that was one of the things Sal wanted. He wanted something for live, real-time improvisation because that literally didn’t exist in electronic music at the time,” said Greg Danner (ENG ’71, ’74), a student and later friend of Sal’s, who has been maintaining Sal-Mar for the past fifteen years.

Composer John Cage, who was an artist-in-residence at Illinois at the same time Sal was on faculty, also had an interest in improvisation and unplanned methods to create music. Cage would record on a reel-to-reel, cut it up, and assemble the tape in random order. Yet, Cage’s music was still on tape and could be played over and over again.

“That was absolutely not what Sal wanted,” Greg said. “Through his entire life, Sal would compose on staff paper, but he finally admitted, ‘This is very limiting. You end up with something that is more or less the same every time.’ He wanted to explore difference.”

Spending so much time with Sal before he died in 1995 and with the Construction itself, Greg has had time to reflect on his good friend and the groundbreaking machine he created.

“I’ve come to realize in my later years that if you’re dealing with classical music, the conductor is incredibly powerful in terms of just how much effect can be had on that piece of music by what the conductor is doing with it,” Greg said. “Orchestras in some ways are like a great big Sal-Mar Construction, and I’m sure Sal had that in mind, and he always felt like, you don’t play the Sal-Mar, you conduct it.”