One hundred years have passed since the outbreak of the 1918 influenza pandemic, and despite our deeper scientific understanding of biology, virology, and contagion, scientists are still investigating the mystery of what made this pandemic so peculiar.

Chris Brooke is an assistant professor of microbiology at Illinois and runs a lab dedicated to studying influenza. There they study the unique biology of influenza, contributing to a better genomic understanding of the virus. “We are interested in understanding how influenza viruses replicate, transmit between different hosts, and how they evolve,” he explains. “It is shocking how important this virus is, how long we’ve studied it, and how little we still know about its basic biology.” 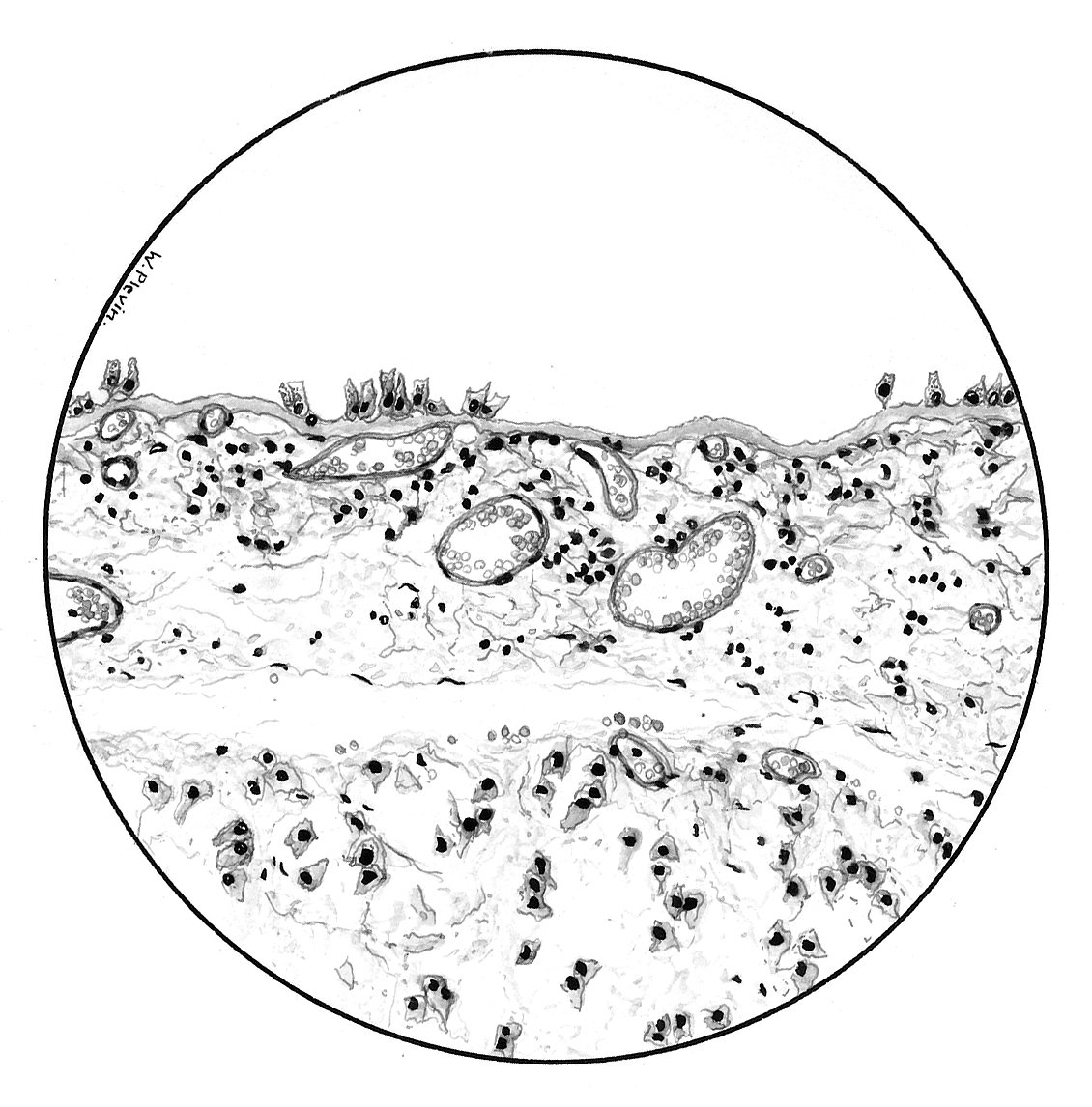 The goal, of course, is to bring influenza under control. By understanding the biological structure of the virus better, Brooke’s lab is helping to inform the development of next-generation vaccines and therapeutics.

That is starkly different from influenza which requires a vaccination every year. The reason for this is that influenza is exceptionally adept at escaping and evading our immune response, evolving so quickly that it is nearly impossible to accurately anticipate the viral strains from year to year. Public health officials make their best, most educated prediction in January and February about what the flu will look like in October in order to prepare a new vaccination. The production of that vaccine, unfortunately, takes months to complete, making it impossible to respond quickly with a new vaccine if they predicted wrong.

This leaves scientists and health care professionals unable to truly predict how many people will get sick each year or how sick it will make them. It also leaves people vulnerable to another pandemic.

Sometimes a virus travels faster than the information about it does, and it can be difficult to keep people both calm and informed while data is still being gathered. Even so, it is important for health officials to stay ahead of the public discussion during health emergencies.

Public health expert Justine Kaplan knows this intimately. Kaplan is a lecturer at Illinois, as well as interim director of Illinois’ Master in Public Health program. She was working for the Texas Department of State Health Services when the 2009 H1N1 pandemic hit, also known as swine flu. This strain was believed to have originated in Mexico, and moved north through the United States and into Canada. And, just like the 1918 pandemic, this outbreak caught the nation’s attention because of the group for whom this strain was especially deadly—young, healthy people.

Texas was one of the first states affected in 2009, and the initial data coming out of Mexico led Kaplan and her colleagues to believe this flu was especially virulent, with numbers suggesting a mortality rate of nearly fifty percent. As more and better data came in the mortality rate dropped significantly. Yet, Kaplan still had to be vigilant about communicating to the public the most current and accurate information as it was still unfolding.

“When at first we don’t understand things enough as providers and public practitioners to communicate clearly, that’s the hardest thing,” she says. 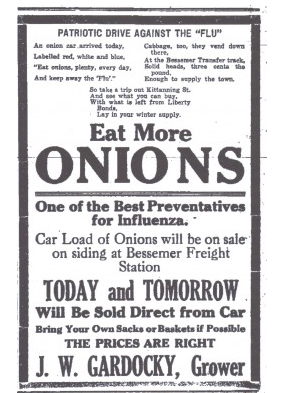 Not only do public health officials provide updates on the progress of a disease affecting a community, they also help that community defend itself against infection. No matter what the era, it seems, these officials often face an uphill battle. Rumors and misinformation can distort the facts, which can prevent people from truly understanding their risk and/or what steps they should take to protect their families. It can also lead to panic and fear.

Though the 1918 pandemic was most intense for only a few months, there were those who promptly attempted to profit from the public’s fear. For example, one onion vendor claimed onions were one of the “best preventatives for influenza.”  Americans were advised to avoid tight clothing, put salt up the nose, and buy any number of new folk remedies, like olive tar, to hit the market.

“People want a vaccine, they want a magic pill,” Kaplan says. But she notes that many of the key principles in flu prevention remain the same today as they were in 1918. “You need to wash your hands. Really. Take the full twenty seconds. Use soap. Use warm water. Take off your rings and scrub vigorously. That’s not a sexy answer, but hand washing is the number one way to prevent disease.”

Science has made extraordinary strides over the last one hundred years, and yet finding ways to contain the influenza virus continues to present a challenge. In fact, the 1918 influenza virus is technically still with us.

“After merging into the human population in 1918, that pandemic virus stayed within the human population and continued to evolve and change,” explains Chris. “It gave rise to subsequent strains that circulated within humans in subsequent years. Even as new viruses emerged—we had pandemics in 1957, 1968, and 2009—part of the genomes of those viruses were derived from the original 1918 virus.”

Our scientific understanding of influenza was incomplete in the early twentieth century. In fact, until the actual influenza virus was isolated in the 1930s, most doctors believed influenza was actually caused by a bacterial infection. “There were doctors that were trying to study this who were dying,” says Brooke. “They were processing patient samples in order to study them in the lab and were using techniques that would be totally unacceptable today. They understood there were things you could not see that were infectious, but the control methods were unsophisticated.”

Regardless of its origin, physicians at the time did understand the symptomatology of influenza enough to know that the extreme physical response to this strain was very unusual. Patients began hemorrhaging from multiple parts of the body including the nose, mouth, and stomach. Some patients hemorrhaged so severely that blood began to pool under their skin, causing dark spots to appear on their body. In some cases, this strain also produced hallucinations, visual disturbance, and mental breakdown. The painter Edvard Munch, most famous for his painting “The Scream,” survived the flu in 1918 and created a series of drawings and paintings illustrating the depth of his illness. “Self-Portrait with the Spanish Flu” now hangs in a museum in Oslo, Norway.

Most people who died, however, succumbed to bacterial pneumonia brought on by the initial influenza infection. Because influenza virus weakens the immune system, bacteria that the body would normally be resistant to from takes over. This is still true today, but in this aggressive outbreak, the damage to the respiratory system was swift and severe.

Another hallmark of the 1918 influenza was its speed. It infected communities swiftly, but more importantly, people fell sick—and sometimes died—very quickly. “There is something unique about this virus that made it act very rapidly and lead to very severe infections,” Brooke says. “Once scientists were able to reconstruct it in the lab in 2005, they were able to pinpoint different genes that are probably responsible for the extreme virulence of the virus, but this is still an active area of investigation.”

What we do know now is that the main gene in the influenza virus targeted by our immune system is called hemagglutinin, or HA. Many scientists study HA, but often in isolation. Brooke’s lab is looking at the complete viral genome and asking whether other parts influence and govern how HA evolves. Understanding the broader context of the genome and how HA evolves could lead us to more effective anti-viral treatments for influenza.

“Some of our work is focused on whether we can predict future evolution, trying to identify the specific factors that might influence whether the virus evolves in a particular way,” Brooke says.