In celebration of Illinois’ enduring commitment to collecting modern and contemporary art, Krannert Art Museum’s new permanent collections installation, “Art Since 1948,” showcases more than fifty objects made from 1948 to the present. This slideshow highlights some of those works of art.

Made up largely of works from Krannert Art Museum’s permanent collection, as well as some on loan, “Art Since 1948,” showcases more than fifty objects made from 1948 to the present. This new installation is the first time in over a decade that the museum has dedicated a gallery to its modern and contemporary collection. The show’s space in the museum is organized by themes and a loose chronology, beginning with works collected from the university’s first “Contemporary American Painting” exhibition in 1948.

Museum collections reflect the judgments and degrees of risk taken by the people and institutions who assembled them. Rather than tell one story of modern and contemporary art and our campus’ decades-long commitment to artists, exhibitions, and collecting, this installation—designed by Julia di Castri—offers multiple pathways and perspectives. 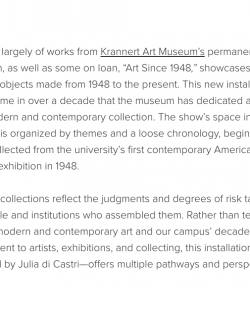 Self-taught artist Purvis Young painted on found materials, including weathered wood, plastic, street signs, glass, bus seats, and library books. Young lived in the Overtown area of Miami, Florida, a place emblematic of many U.S. cities where post-World War II highway construction decimated African American neighborhoods. He endeavored to harness the political and communicative power of protest art. Young described his gestural figures as being under struggle and in the process of moving collectively to seek economic access and better lives. 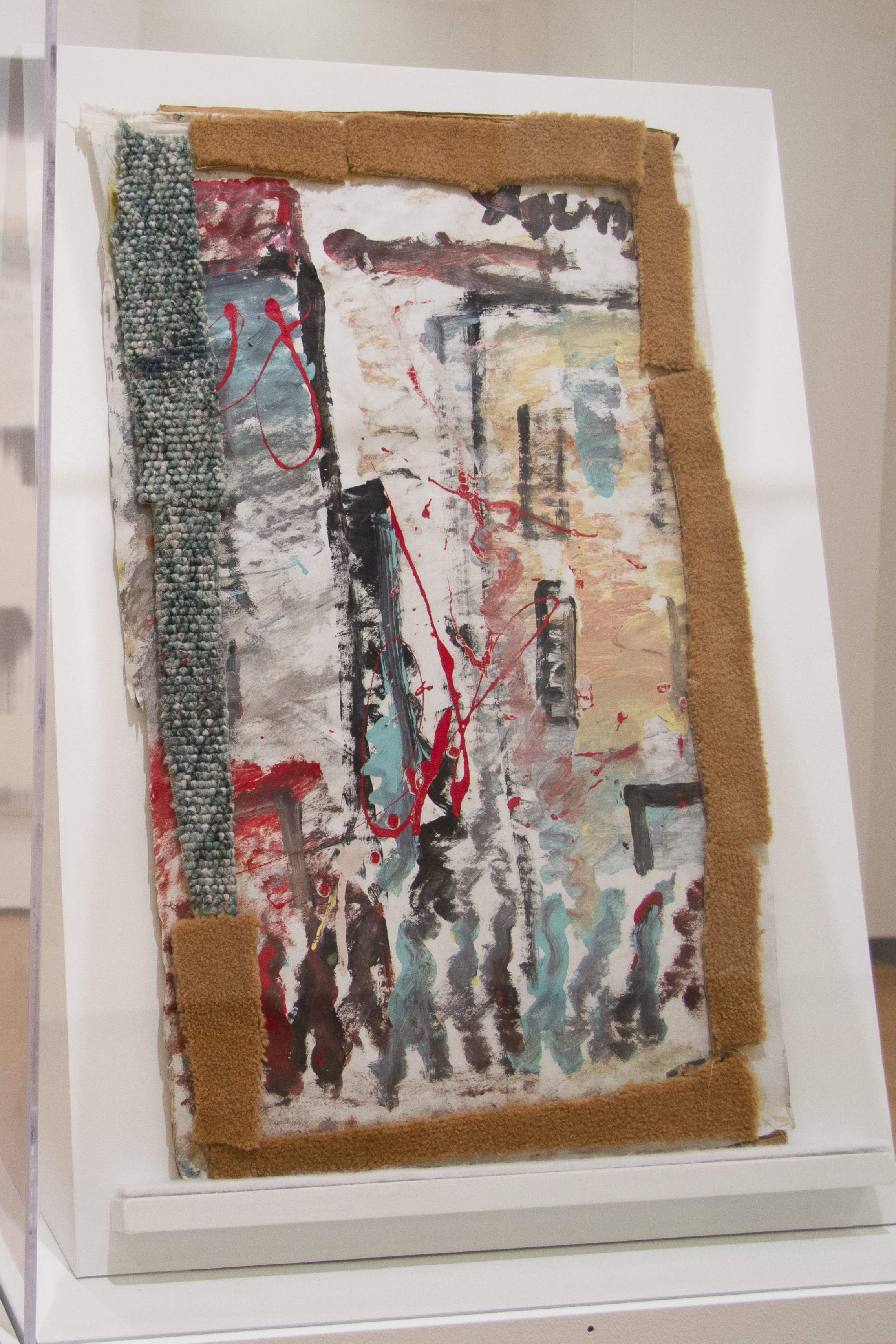 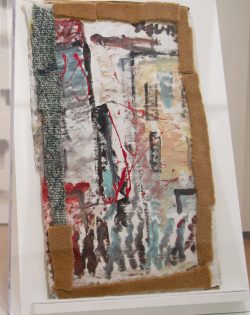 William Baziotes was fully embedded in conversations about abstract painting among artists in New York in the 1940s. He met each week with Roberto Matta, Robert Motherwell, Jackson Pollock, Gerome Kamrowski, Lee Krasner, and Peter Busa to practice and critique “automatic writing,” a free-form method of drawing determined by subconscious associations. And yet, Baziotes’s strand of surrealism is completely his own. Moon Animal shimmers in its tenuously connected pink shapes against a marbled blue-pink background with sun and moon overhead. The artist transformed his painted surfaces into living organisms reminiscent of both cellular and celestial worlds. 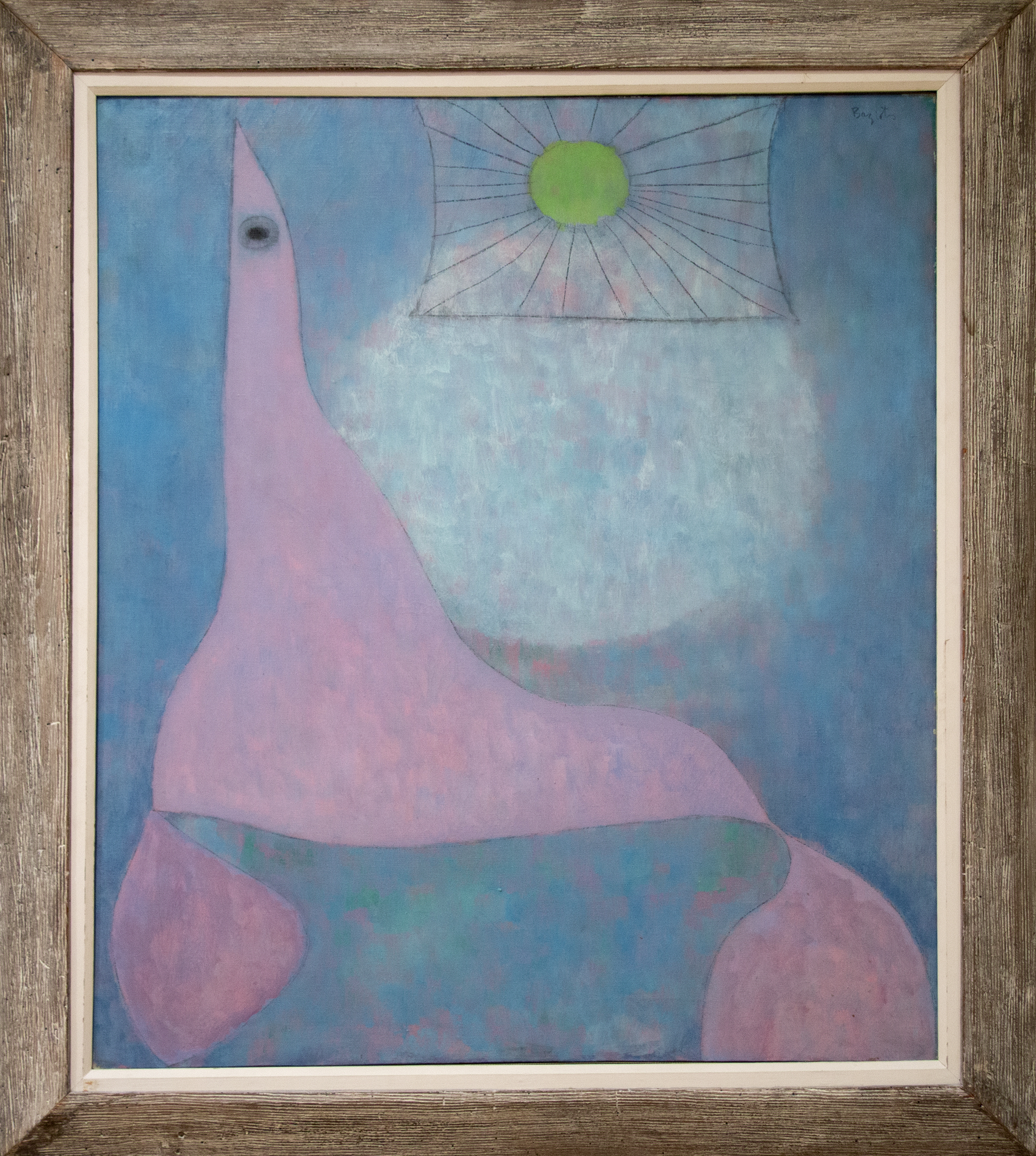 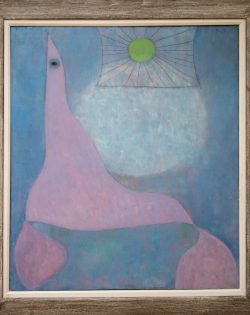 Prolific mid-twentieth-century artist Hedda Sterne’s wide-ranging work encompassed surrealism, portraits, linear horizons, and a fascination with machines. Work by Sterne—a central player in the New York School of abstract artists—has been part of KAM’s collection since 1950, when the University of Illinois purchased Machine Five through the Festival of the Arts Purchase Fund. KAM organized one of the few museum retrospectives of her work in 2006. In N.Y. 1 [Road #4], Sterne draws an implied grid and uses spray paint to suggest the continuous urban motion of New York City and the wide-open road, both of which transfixed Sterne as an immigrant to the US. 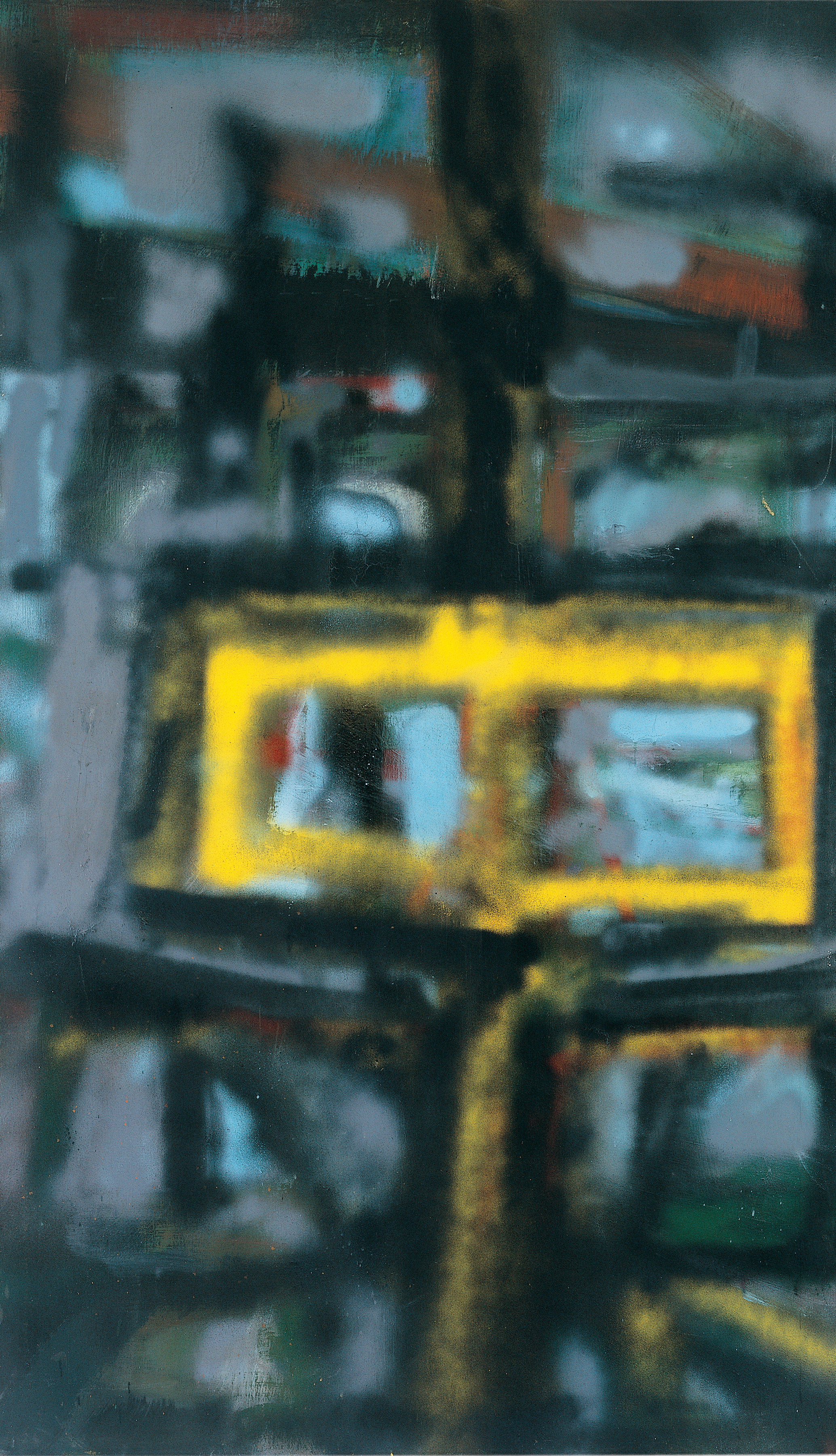 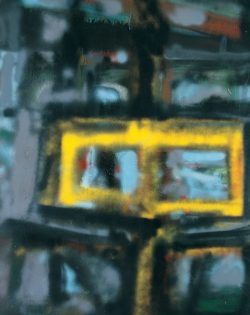 Living and working in the Coenties Slip neighborhood of lower Manhattan among the artists Robert Indiana, Ellsworth Kelly, Agnes Martin, Lenore Tawney, and Jack Youngerman, Chryssa explored her fascination with the iconic status of urban communication symbols by creating paintings, drawings, and metal and neon sculptures. Inspired by Times Square and Chinatown after moving to New York City in 1954, she translated her new environment into studies of light and shadow with heavily layered word fragments. Words became dense compositions—here AUTOMAT is elongated, superimposed, and folded over. Smoky Plexiglas suggests an evening perspective. Chryssa’s techniques, in the artist’s words, allowed the work to “repeat in all directions.” 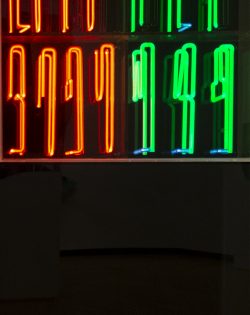 African American photographer, anthropologist, and film producer Doris Derby (MA ’75, PhD ’80) traveled south from her native New York at the invitation of the Student Nonviolent Coordinating Committee (SNCC). Derby’s photographs are immersed in the everyday powerful dramas of the civil rights movement. Her focus on women’s contributions and her avoidance of more commonly known heroic figures in her photographs have brought her less prominence compared to photographers Danny Lyon (who worked for SNCC in Cairo, Illinois), Bob Adelman, and Bruce Davidson. Derby’s work shows her clear skill and intention to center a person in each frame amidst signs of their economic circumstances and the social movements affecting their daily lives. 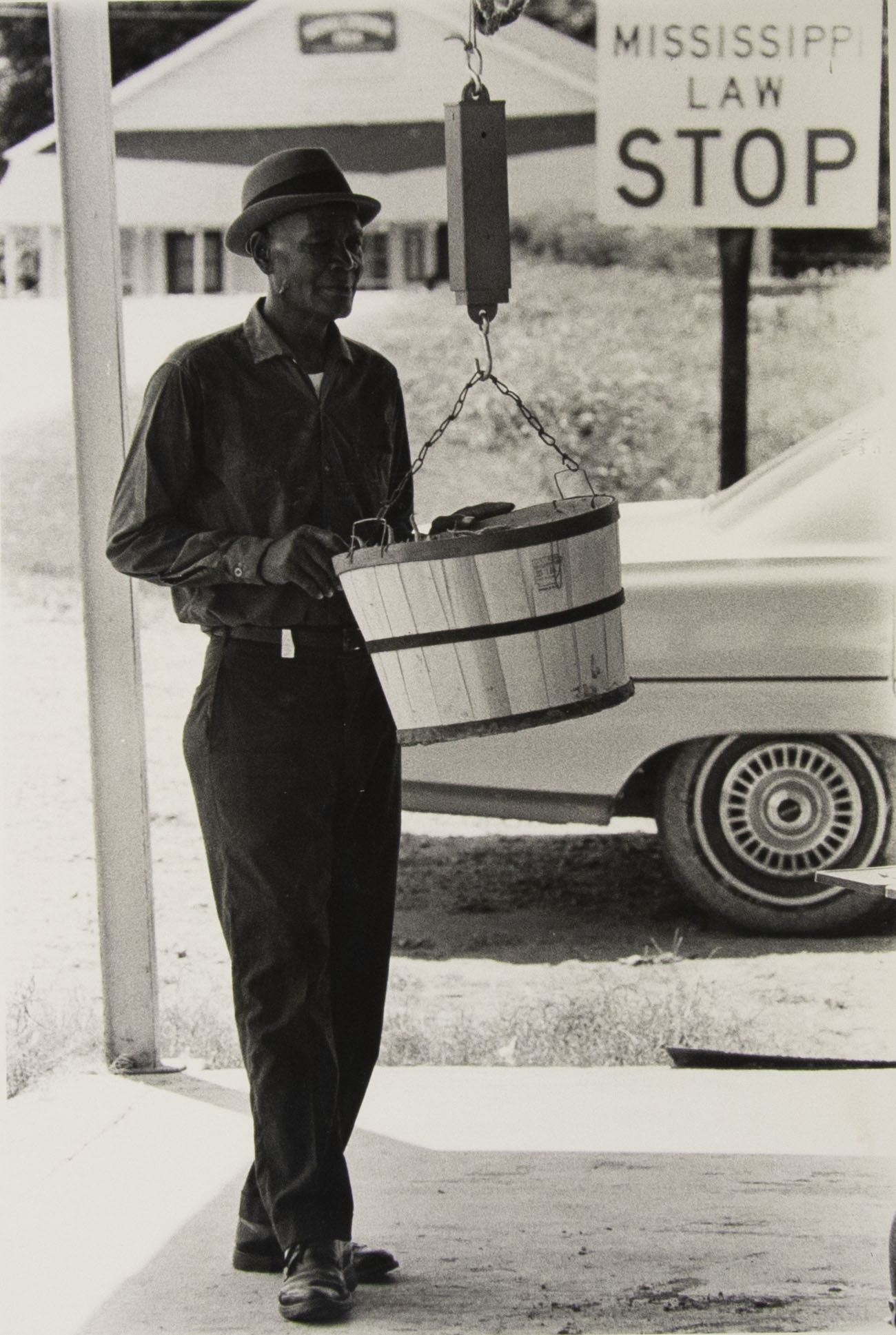 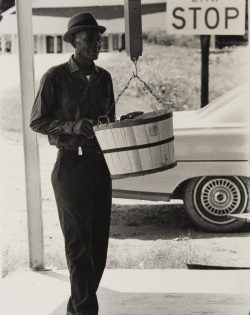 Louise Fishman (MFA ’65) is an ardent and studied practitioner of abstract painting. Since leaving the University of Illinois School of Art + Design for New York City in the 1960s, she has consistently reworked the abstract expressionist gesture and the minimalist grid into tools that organize a picture plane and communicate history and emotion. Her work is physical—the canvas matching the reach of her arms, and her brushwork showing evidence of scrapers, trowels, and materials applied to the surface to transfer paint away from the canvas. Fishman’s dedication to process undermines male-centered painting traditions and imbues all of her work with an expansive relationship to her identities as Jewish, feminist, and lesbian.

Blonde Ambition is indebted to Fishman’s favorite painters, including Franz Kline and Agnes Martin, the latter with whom Fishman spent time in New Mexico in the years leading up to this work. From Martin, Fishman learned how to paint grids with breathable structures susceptible to manipulation, instead of a rigid form. Blonde Ambition is desirous, an homage to two of the artist’s great loves in Marilyn Monroe and Madonna, whose eponymous concert tour Fishman saw in 1995. 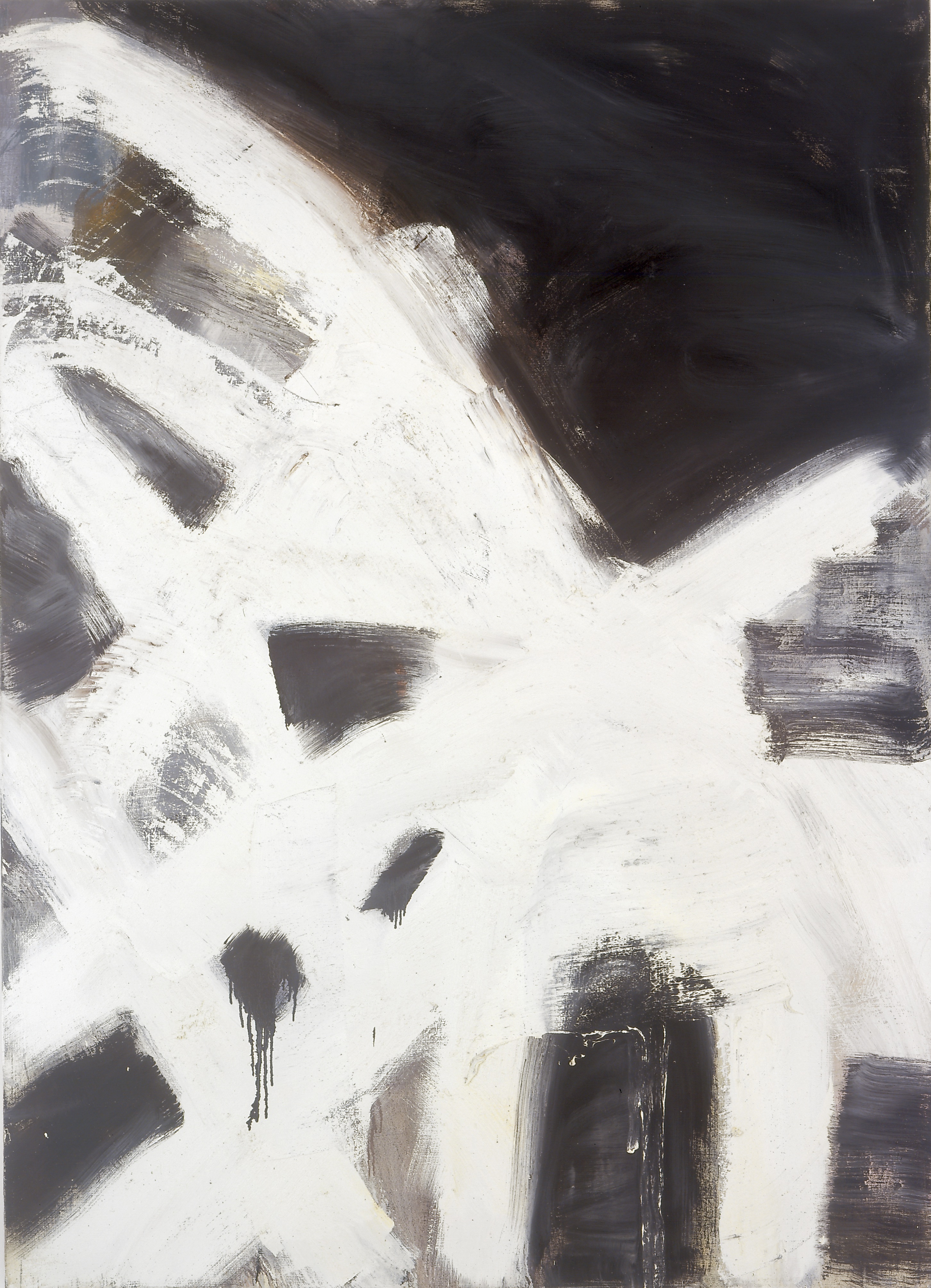 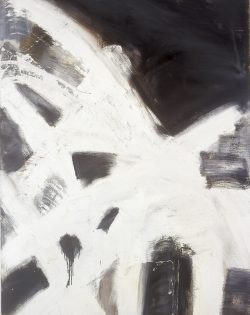 Sue Coe draws no distinction between art and activism. She is known primarily as a commercial illustrator and for her collages, drawings, and prints protesting slaughterhouse conditions, police brutality, and gender-based violence.

Using painting, not what Coe considers her primary choice of medium, The Assassins shows the moments after Malcolm X’s assassination on February 21, 1965 at the Audubon Ballroom in New York. Coe foregrounds the hooded assassins and their weapons using Life Magazinephotographs and pictorial conventions from her frequent artist muse, German printmaker Käthe Kollwitz. In Coe’s telling, the devastating historical event continues to loom and menace, years after it occurred. 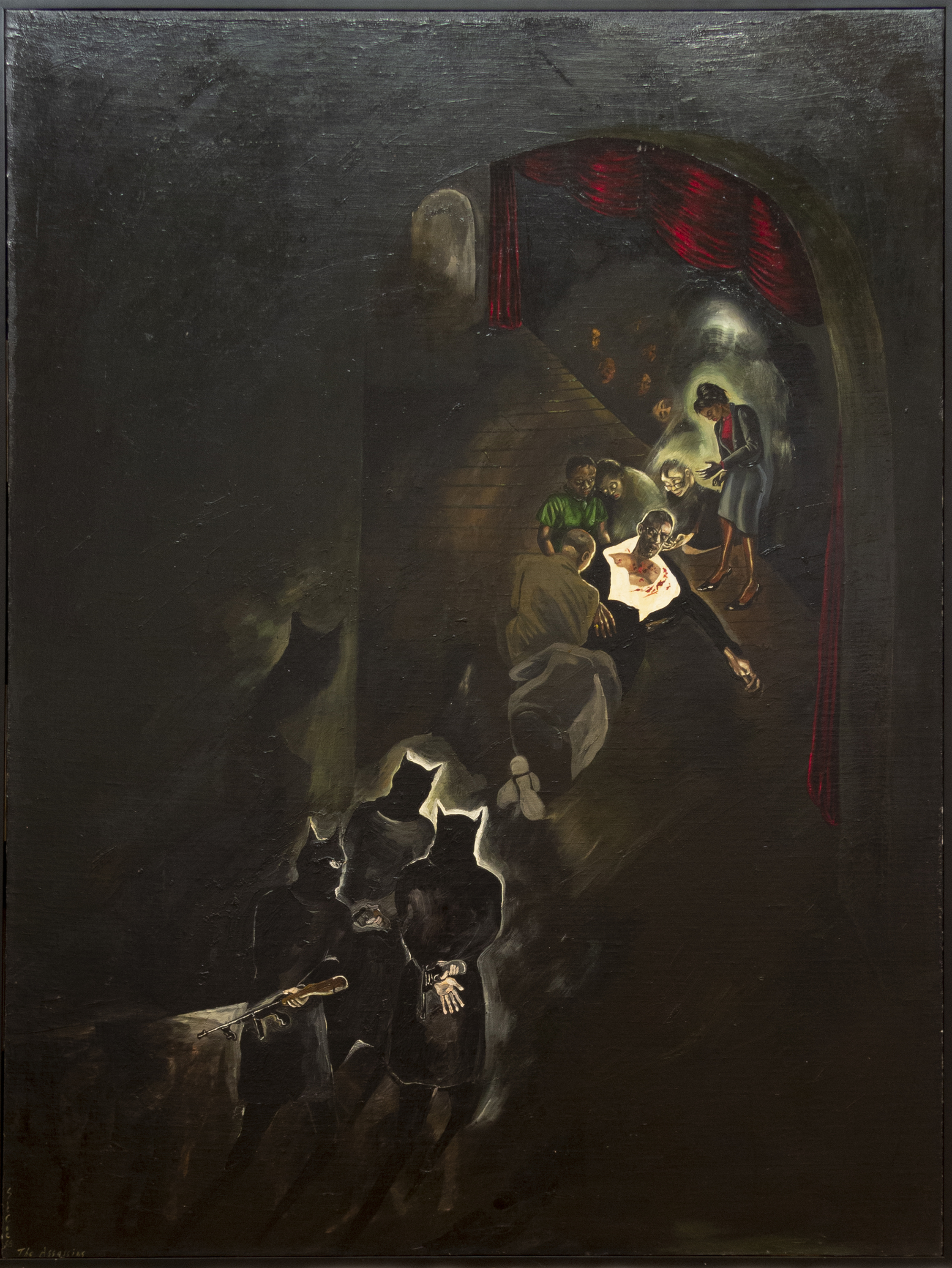 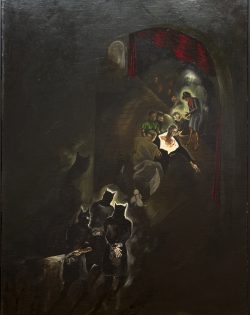 In Silenced #1, Assu stacks elk-hide drums in a manner that renders them silent and unusable. The work refers to Canada’s ban from 1884 to 1951 on potlatch ceremonies, which were an indigenous system of government, culture, and economy. The ban directly affected Assu’s family, including his great-great grandfather, Chief Billy Assu, whose sound recordings drew the artist to the Kwakwaka’wakw ethnographic archives. The repeating patterns on Silenced #1 reference minimal art, what sculptor Donald Judd described as order and continuity, “one thing after another.” Self-conscious of its status as artwork, Silenced #1 recalls what happens to ceremonial objects when they enter a museum. 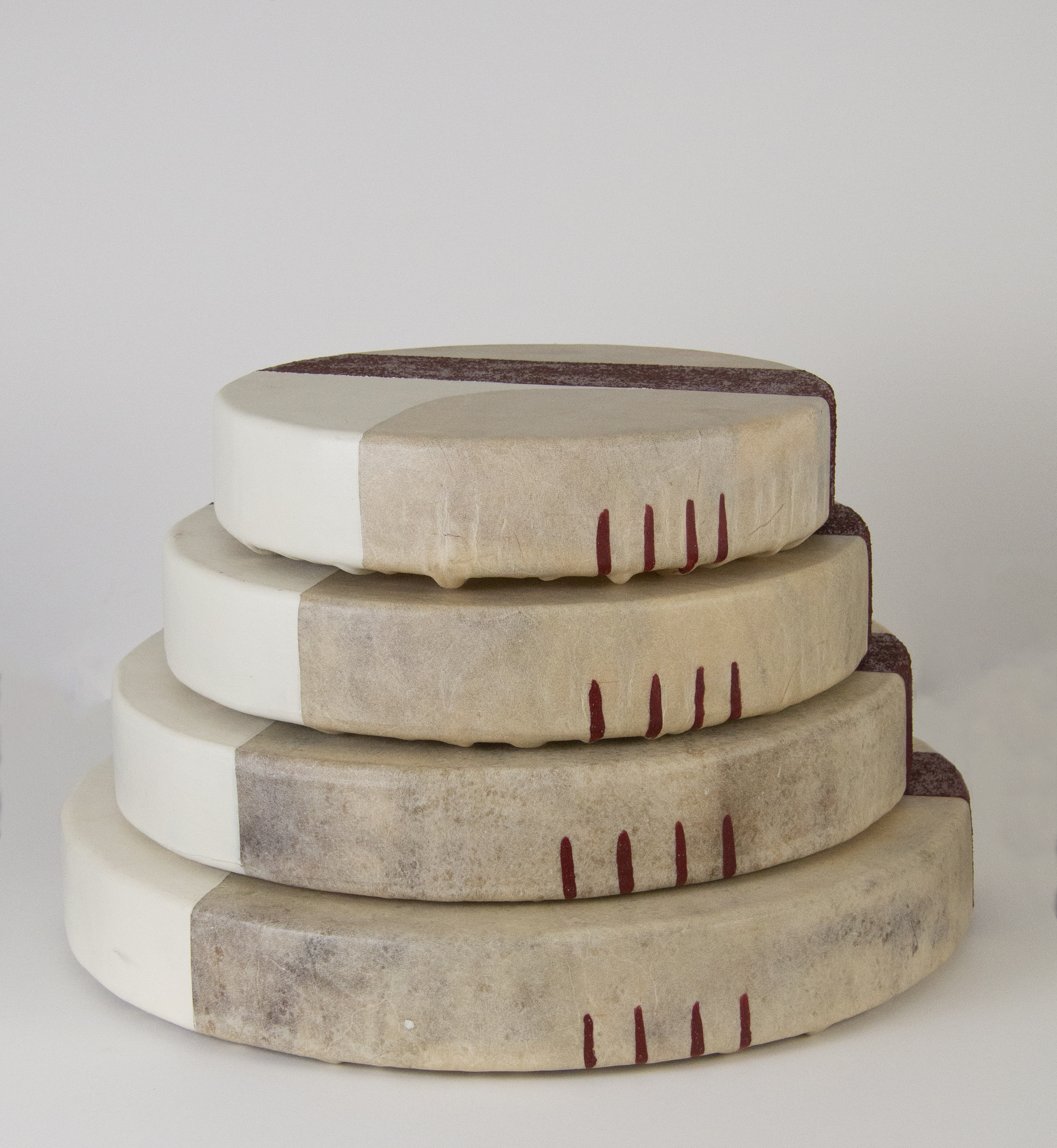 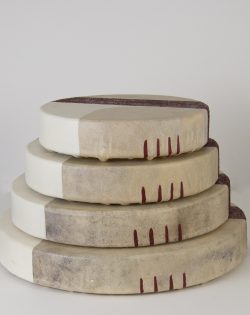