For the love of the game – Storied.
Skip to content

“Let me tell you what I did in my very last game of college ball,” history professor Adrian Burgos, Jr. is laughing as he and I walk toward the dusty pitcher’s mound on Illini Field. “I finally hit a home run over the fence rather than just legging one out!”

Today, Adrian is swinging a bat for the STORIED cameras, but his lifetime passion for baseball has taken him all the way from Sunday afternoon games at the ballpark with his abuela to playing college ball for Vassar to the red carpet at the National Baseball Hall of Fame. At Illinois, Adrian turned his passion into his profession, teaching students about history through the lens of sport, race, and immigration.

“I love to share my fascination with history. History is not dead. It is really about a relationship between us in the present and the past,” he said. “It is about how we understand the facts, how we look at them, what we know, and ultimately what we come to understand—even more so as we mature and gain new perspectives. If you understand this about history, then you are constantly learning and discovering new things. That’s why I love what I do. It is always evolving.”

Adrian comes to the game as a historian, former athlete, sports journalist, and a fan. It is this rich foundation of experience and passion that runs throughout his work both in his role as a professor in the classroom and as the editor of La Vida Baseball, a digital media company in partnership with the National Baseball Hall of Fame that features the contributions and history of Latino players in baseball.

This topic of his research and expertise has its roots in a family that, in his words, had a “multi-generational love affair with baseball.” He grew up visiting his baseball-loving grandmother in the Bronx, visiting Yankee Stadium, and playing softball games in the neighborhood parks.

“I grew up in a very devout family. We went to church every Sunday—a Latino church where the music was basically salsa but with Christian lyrics. We had the trombone, the trumpet, the piano, the drums. All of it. These people who would make a joyful noise in the morning would retire in the afternoon and go to a ballpark,” he said. “We brought that passion from our morning service to our afternoon at the game. That is what really launched my curiosity and my desire to study the history of baseball. I wanted to understand what it was about baseball that drew us together. History is not boring to me. It’s a passion play.”

When Adrian was in his senior year at Vassar, he wrote his thesis on the introduction of baseball to the Caribbean. His research led him to learn more about the Negro Leagues, active largely between 1900 and 1954, when Jackie Robinson was recruited by the Brooklyn Dodgers. “Until that point, I had not learned that during the era of baseball segregation, the overwhelming majority of Latinos had started their career in the Negro Leagues. This discovery put me on the path of researching and learning about that history, and ultimately writing and educating others about it,” he said.

One of the men that Adrian ended up writing about was Alejandro “Alex” Pompez, a Cuban-American team owner who owned both the Cuban Stars and the New York Cubans. “Most people don’t know his story,” Burgos explained, “because the story of race, migration, and sport often gets lost when it comes to Latinos in this narrative of black and white.”

Pompez was a vibrant and powerful member of the baseball community, and is responsible for recruiting and developing scores of players. He established the Cuban Stars in 1916, and then owned the New York Cubans from the late 1930s through their last game in 1950. As the Major Leagues began to integrate, Pompez was hired by the New York Giants to recruit African American players as well as players from Latin America. Adrian’s second book, Cuban Star: How One Negro League Owner Changed the Face of Baseball, tells the story of Alex Pompez’s life and all that he witnessed as baseball changed during the twentieth century.

It wasn’t until Adrian was deep into his research for the book that he realized Alex Pompez was buried in Woodlawn Cemetery in the Bronx.

Just across the street from his abuela’s house.

Adrian created a class in the history department called Sport and Society. In that class, he assigns a book about the integration of college sports titled Breaking Jim Crow. “Part of the reason I teach that book is because I want my students to read about people who were their age when they were breaking segregation. These are moments we see as grand, but I turn it around and remind them that we all make history,” he said.

“We all are historical actors, each and every one of us. So, it is not just about the past. These were young men and women trying to find their way through college and experiencing many of the exact same emotions that my students do. I want them to try and understand the world better and what these historical figures achieved. And, in turn, I want my students to think about what they can achieve.” 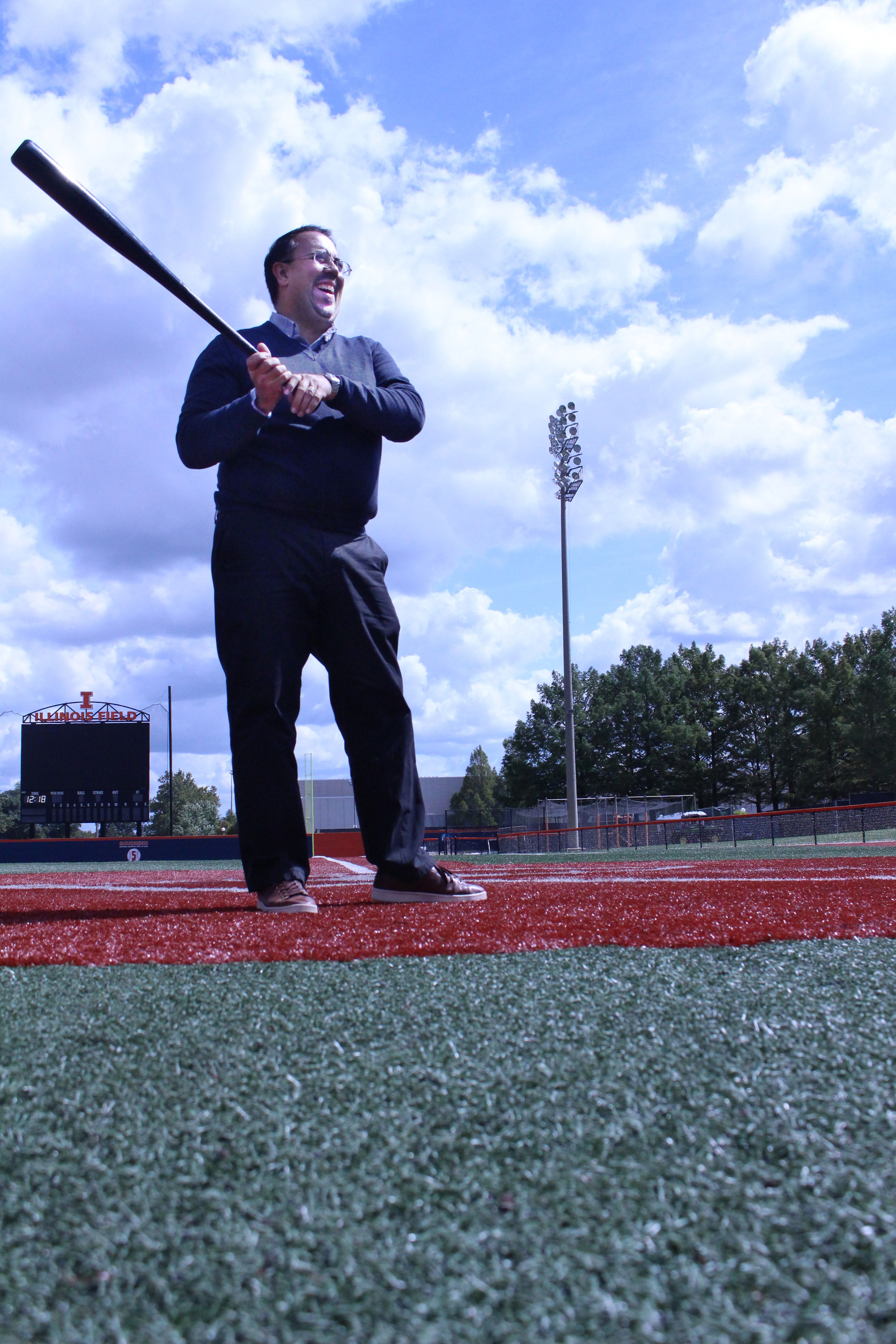 To understand America’s Pastime is to wrestle with a complicated and often painful history that has been reflected on the field. Yes, it is a story of opening days and peanuts and the swell of pride fans feel when their favorite player rounds home base. But the story of baseball also reflects our politics and policies, the best and worst of our American ideals.

“I taught this one book a number of years ago in my history seminar. It talked about all the ways in which professional baseball players in the minor leagues are at times exploited by major league organizations and not really taken care of,” he said. “One of my students said to me, you should hate baseball. Not at all. What I see are players who are able to persist and overcome. I admire them for being able to navigate this kind of system, and in some cases, like Roberto Clemente and others, they ways they think about how to transform the institution.”